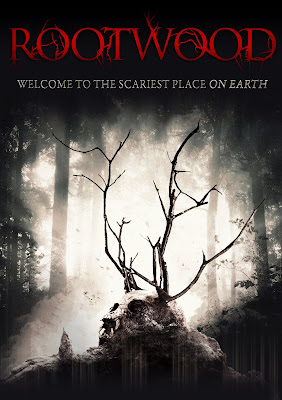 The film is about two podcasters (Elissa Dowling, Tyler Gallent) who are hired by a film producer to shoot a documentary on an urban legend known as The Wooden Devil. They along with a friend (Sarah French) set out to find evidence to see if this legend exists. Alone in the woods, they soon find out sinister is happening in the wood and they must find a way to survive. The film also stars Felissa Rose (Sleepaway Camp).

Going into "Rootwood", I was expecting that this film was going to be an average film at best given most of the film takes place in the woods. I was surprised that this film was one of those indie horror that I really enjoyed a lot.

Director Marcel Waltz's does a very good job with his direction. One of the things that I liked about it was the fact he's able to make sure the film's main scenes had an intense feel. Whether its the way he approached those scenes to the way he directs the action, everything does a very good job in keeping your interest considering this is one of those film where its confined to one area for most of the film. It really made this film a very good film and it kind of surprised that me that this was very good.

Another thing that I enjoyed about the film was acting. I thought the acting was entertaining, Elissa Dowling, Tyler Gallent, Sarah French and Felissa Rose did a great job with their performances as this is one of the film's strong suits. There was also very good chemistry between Dowling, Gallent, and French as they played very well off of each other and made the scenes in the woods work. This really also made this film very entertaining.

The screenplay written by Mario von Czapiewski is a very inventive and very good one as it mixes in the found footage and narrative elements. What I liked was the screenplay was the fact that he tells the story in a different way to the point that it pays off. I liked the fact that he mixes in elements of found footage and narrative elements as it helps with the purpose of the story as it kept me engaged with the characters and the story as there wasn't a moment where I felt bored. This also help the overarching story as it helps make the ending of the film work which I liked a lot as it was a direction that I wasn't expecting.

If you need a film that brings intensity, very good acting and a direction you don't see coming, then this is film to see on VOD and DVD. "Rootwood" is an intense film that will leave you in shock.