"We Summon the Darkness" Review by Anthony T 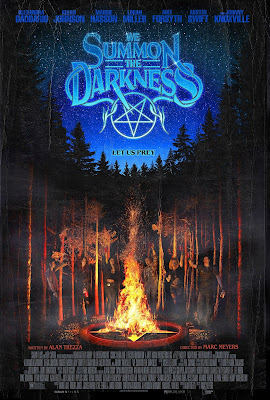 It's been a while since I reviewed a film for the site, but this is a film that I couldn't pass up reviewing. I've been wanting to see "We Summon the Darkness" for a while even since I've heard about the film on Bloody Disgusting. It looked like my type of film and plus I'm a big fan of Alexandra Daddario, who has been in such films as "Texas Chainsaw 3D" and "Baywatch".
The film is about a trio of best friends (Alexandra Daddario, Maddie Hasson, Amy Forsyth) going to a heavy metal concert. They find out in the news that there is a series of a murders that being tied to satanic rituals. During the concert, they pick up three guys and they head off to a house that is owned by a preacher (Johnny Knoxville) and father of one of the girls. Soon, their night of fun and partying turns into a dark and deadly one.
Going into "We Summon the Darkness", I thought that this was going to be a film where it would be along the lines of "Satanic Panic" and "Ready or Not" where there would be a lot of dark humor thrown in to the point that it would be like those film. Was I ever wrong as this plays more a serious horror film than I thought it would, even though it has a little bit of dark humor which is no complaint. It's what made me like this film a lot as this was different from those films and its the best film that I've seen so far this year.
One of the main reasons why this film was very good was its direction. Director Marc Myers does a very good job making sure that this had an intense and suspenseful feel to it. Whether its the way that he approached the film's scenes to the way he directs the action, everything made the film different from all these satanic films that have been released lately and its one of the film's strong assets. There was no time where this felt like another "Ready or Not" as Myers takes a more serious approach to the material which makes the directing very good.
The other thing that Myers does very well is the way that he directs his cast. He does a very good job making sure the cast has chemistry with each other. It made the dynamic of the film and made me interested in the characters. Speaking of the cast, I thought this film had some very good performances. First off, this is Alexandra Daddario's best film since Bereavement (aka Malevolence 2) which was released almost 10 years ago. She does a very good job making sure that her performance is one that keeps you on edge and she also worked very well with the other co-stars as her personality in this film is one that keeps you invested in the film without giving too much away. She is one of those women in horror that doesn't get as much credit as other horror actresses as even in bad films she also make performances stand out. The film also very good supporting performances from Amy Foryth and Johnny Knoxville as well.
The screenplay from writer Alan Trezza does a very good job making sure the film had a dark and intense tone. One of the keys things that makes his screenplay very good was the way he builds up his characters and the situation at hand. I liked how everything in the beginning was slow. It allowed me to get to know these characters to the point that I was invested in them when the twist happens. I like films like this that take its time to set up characters. It allows for some shock moments to feel shocking. Everything did that except one scene which I won't talk about as it gives away a crucial point in the film. The other thing that I also liked was the tone of the film. Trezza does a very job making sure the dark tone stays during the course of the film. By doing that, it allowed for the story have an intense feel and makes you feel like the stakes are serious. It's different from all the other satanic films that have been released in over the last year or two. This is another reason why I liked "We Summon the Darkness" a lot as this felt more of a serious horror film unlike "Satanic Panic" and "Ready or Not".
This is definitely a horror film that people should be checking out. Its a very good film from start to finish as  "We Summon the Darkness" is an intense film that strays away from recently releases like"Ready or Not" or "Satanic Panic" and makes cult based horror films dark and intense.
Review Rating: Five Stars
at 8:48 PM
Labels: Alexandra Daddario, Johnny Knoxville, Reviews, Saban Films, We Summon the Darkness