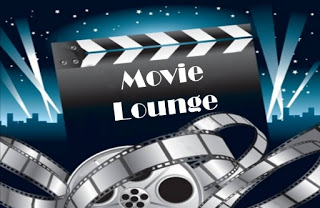 Welcome to the 748th Edition of my series.  As we continue into these uncertain times, I continue to bring my movie blog from the Fortress of Solitude.  I wish everyone well and to stay safe.  I also feel for those out of work or less work because of what is happening and also wish those well.  For me, all I have lost for now is my extrovert lifestyle but I know I'll get that back so I'll just continue to hang in there.  There is one more chance to catch the radio play TREASURE ISLAND today (Sunday) at 5 pm eastern time on https://www.weciradio.org/ where I voice the characters of Black Dog, Captain Smollet and Tom Morgan.  There is not much else to say right now so I'll just get on with my selections for the week. 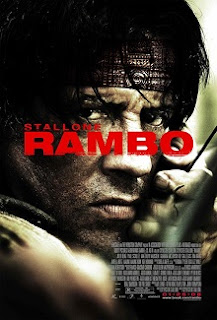 Rambo (2008):  Sylvester Stallone directed this action film and the fourth of this franchised based the character created by David Morrell.  Stallone reprises the role of John Rambo that he brought to life and iconized.  Rambo is leading a more secluded life in Thailand by capturing snakes for local entertainers and chauffeuring locals in his PT boat.  He is soon approached by a group of Christian aid workers lead by Michael Burnett and Sarah Miller, played by Paul Schulze and BUFFY/ANGEL alum Julie Benz, to lead them out to Burma.  While reluctant to take them, he finally gives into their pleas and takes them their only for the group to be captured by the ruthless and oppressive Burmese military.  Rambo learns of this and agrees to take a group of mercenaries to find them while also helping them.  Matthew Marsden, Graham McTavish, Reynaldo Gallegos, Tim Kang, Ken Howard, and many others co-star in this action film.  To me, this is my favorite of the series though I have yet to see the latest one.  I really liked the first one where he essentially goes to war with a group of redneck cops.  This was the first appearance of Rambo in 20 years and while it was extremely violent, I thought it was also strangely moving.  This just cements for me how great Stallone really is and brings to life such great characters.  This is available to watch on Showtime On-Demand. 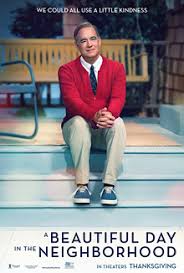 A Beautiful Day in the Neighborhood (2019):  Who else but me goes from John Rambo to Fred Rogers.  Marielle Heller directed this biographical film inspired by the article CAN YOU SAY...HERO by Tom Junod that he wrote on Fred Rogers.  Matthew Rhys stars as reporter Lloyd Vogel, renamed from the actual name Tom Junod, who is assigned by Esquire magazine to write an article on Fred Rogers, played to perfection by Tom Hanks.  Lloyd was used to more investigative journalism and was reluctant to take the assignment.  At first he is very skeptical about how real Mr. Rogers is but slowly overcomes his cynicism as he gets to know Fred which helps in his life in general with his family.  Chris Cooper, Susan Kelechi Watson, Maryann Plunkett, Enrico Colantoni, Wendy Makkena, Tammy Blanchard, Noah Harpster, Carmen Cusack, Kelley Davis, Christine Lahti, Maddie Corman, Daniel Krell, Jessica Hecht, and many others co-star in this film.  This is such a feel-good film perfect for this time and it is a time we could use Mr. Rogers.  The movie is more centers around Tom Junod with the backdrop of MISTER ROGERS' NEIGHBORHOOD and no so much revolving around the show or Mr. Rogers which I kind of figured when I saw Tom Hanks being nominated for Best Supporting Actor at award shows. 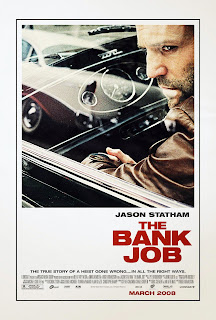 The Bank Job (2008):  Roger Donaldson directed this heist film which stars Stallone's fellow expendable Jason Statham.  Statham stars as struggling car salesman Terry Leather who gets the idea for a bank robbery from someone from his past in Martine, played by Saffron Burrows.  This seems very foolproof as Terry gets his team together not knowing that Martine is needing some photos to help her avoid a jail sentence.  Stephen Campbell Moore, Daniel Mays, James Faulkner, Alki David, Michael Jibson, Georgia Taylor, Richard Lintern, Peter Bowles, Alistair Petrie, Hattie Morahan, Julian Lewis Jones, Andrew Brooke, David Suchet, Peter De Jersey, Colin Salmon, Sharon Maughan, and many others co-star in this heist film.  Also, look for Rolling Stones frontman Mick Jagger as a bank employee.  It's a pretty complicated movie to really describe any further than what I did.  This is based on a true story and with many twists and turns.  This is available on Showtime On-Demand. 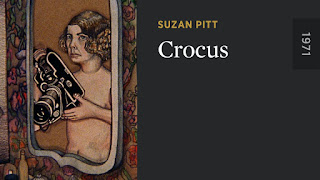 Crocus (1971):  This is my animated short for the week which was written and directed by Susan Pitt.  This revolves around a woman doing her usual domestic rituals like putting the baby to bed and making love.  It is really hard to describe except that the animation is surreal and bizarre.  This is available to watch on the Criterion Channel and has a lot of other works on there that look pretty surrealistic.  Animation enthusiasts might want to make an hour or so to check some of this out including an interview with the late Susan Pitt. 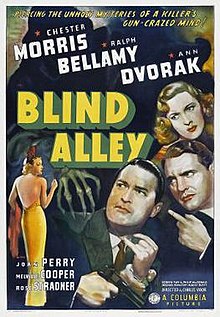 Blind Alley (1939):  Charles Vidor directed this crime drama which is based on a play by James Warwick.  Chester Morris stars as Hal Wilson who has recently escaped from prison.  They take refuge in the home of Dr. Shelby, played by Ralph Bellamy, who is having a bit of a party when Hal and his gang hold the place hostage.  Dr. Shelby just happens to be a psychiatrist and cannot help but analyze Hal to understand why he became the man he has become.  Ann Dvorak, Joan Perry, Melville Cooper, Rose Stradner, John Eldredge, Ann Doran, Marc Lawrence, Stanley Brown, Scotty Beckett, Milburn Stone, and Marie Blake co-star in this film.  This is a pretty compelling film with Bellamy and Morris working well off each other in more of a battle of wits.  This is also available on the Criterion Channel. 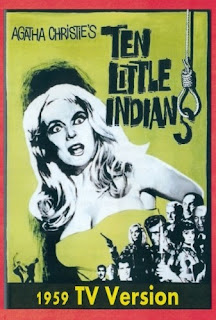 Ten Little Indians (1959):  This is my tv movie for the week which is based on the Agatha Christie novel AND THEN THERE WERE NONE.  A group of ten people with a rather dark past are invited to an island mansion where they are being killed one by one in accordance to the title nursery rhyme and must figure out when one among them is the killer.  Nina Foch, Barry Jones, Romney Brent, Kenneth Haigh, Valerie French, and many others co-star in this tv movie.  This was done in the early days of television and was presented in live fashion just like the popularity now of musicals being presented in this way.  This was a pretty good mystery and keeps us guessing.  This is available to watch on the EPIX network and is about and hour long. 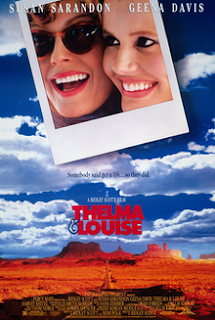 Thelma and Louise (1991):  Now I bring a road trip movie for the week which was directed by Ridley Scott.  Geena Davis and Susan Sarandon star as the title characters in this film.  They are both rather frustrated in their lives and decide to hit the road for the weekend.  Things happen that make them start an unexpected crime spree that puts them on the run from the law and look to escape to Mexico.  Harvey Keitel, Michael Madson, Christopher McDonald, Stephen Tobolowsky, Brad Pitt, Timothy Carhart, and many others co-star in this road film.  This is a good look at friendship and how our actions can effect others if we are not careful.  Davis and Sarandon make this movie really work and I believe this ranks as one of the most memorable endings in cinematic history.  This is available on the Hitz channel. 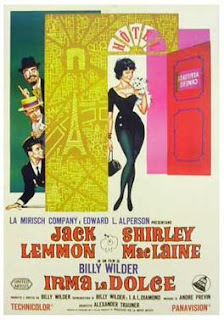 Irma La Douce (1963):  Billy Wilder directed this comedy which is based on a play by Alexandre Breffort.  Jack Lemmon stars as naive French policeman Nester Patou who is transferred to the Red Light district.  He sees what is likely a brothel and feels he needs to make a raid which disrupts the union between the police officers and pimps which costs him his job.  He is working at a bar and befriended by the streetwalker Irma La Douce, played by Shirley MacLaine, and forms a relationship with her while also having an unorthodox plan to get her out of the profession.  Shirley MacLaine, Lou Jacobi, Bruce Yarnell, Herschel Bernandi, Hope Holiday, Joan Shawlee, Grace Lee Whitney, Paul Dubov, and many others co-star in this romantic comedy.  Also look for James Caan in a bit role where he makes his debut.  I liked that they did not use the words prostitute or hooker and I believe I will trying using the word streetwalker from now on.  Lemmon is great in his dual role, the "unorthodox play" I was referring to earlier in the paragraph.  This is available to watch on the Hitz network. 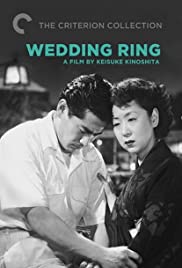 Wedding Ring (1950):  Keisuke Kinoshita wrote and directed this Japanese film.  Jukichi Uno and Kinuyo Tanaka star as married couple Michio and Noriko where Michio is bedridden with his illness and Noriko becomes drawn to his doctor Takeshi Ema, played by Toshiro Mifune, and start to have an affair.  Most people when they think of Mifune, they think of him as the samurai in Kurasawa films like SEVEN SAMURAI, where he is very rough looking.  This is a far more subdued role for Mifune and was really worth the look.  This is a pretty decent film on morality and is available to watch on the Criterion Channel among other Toshiro Mifune films that became available after what would have been his 100th birthday. 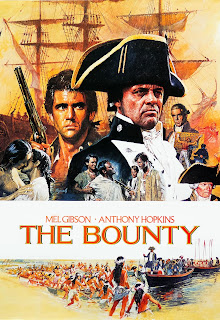 The Bounty (1984):  I end the week with this film based on the famous mutiny that took place between Fletcher Christian, played by Mel Gibson, and Lieutenant William Bligh, played by Anthony Hopkins.  Roger Donaldson directed this film based on a book by Richard Hough.  Christian and other crew members tire of Bligh's harsh treatment beyond the reach of British retribution while we see Bligh lead his crew to safety in a tiny lifeboat.  Laurence Olivier, Edward Fox, Daniel Day-Lewis, Bernard Hill, Phil Davis, Liam Neeson, Philip Martin Brown, Simon Chandler, Malcolm Terris, John Sessions, Andrew Wilde, Neil Morrissey, Wi Kuki Kaa, Tevaite Vernette, Richard Graham, Dexter Fletcher, Pete Lee-Wilson, and many others co-star in this film.  This is probably my favorite version of the story.  I really like that Christian and Bligh are not portrayed as the black and white hero and villain like other versions tend to do and showed both were in the wrong in some way.  I also really like the music score from Vangelis which added to the movie I already really enjoy.

Well, that is it for this week.  Tell me what you like and dislike and stay tuned for next week which so far includes Donald Sutherland, Willem Dafoe, and many others. 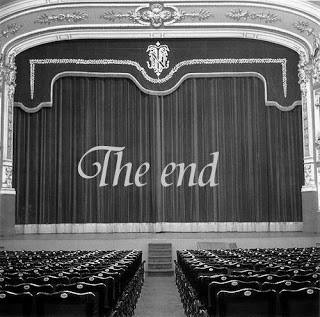