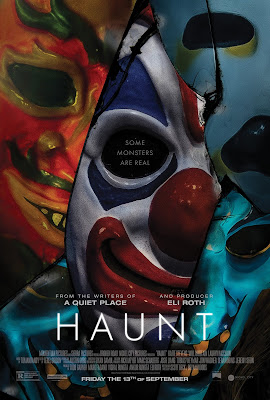 It’s been a while since I posted anything over here on Film-Arcade.net as I’ve been focusing more of my attention on Anthony T’s Horror Show podcast and site but I’m back and hope to have this site updated at least two days a week. With that, why not start off the return of Film-Arcade.net with a film review of a horror film that was recently released on VOD.

It seems like every Halloween Season, you get a horror film that takes place on Halloween. “Haunt” is a film that surprising hasn’t been getting much buzz since the film is directed and written by 2 of writers of the box office hit “A Quiet Place” and the film being produced by Eli Roth. The film is about a group of friends who go out to the club on Halloween Night. They find a flyer for a haunted house that would scare you to the bone. Once entering the house, they realize that this isn’t an ordinary haunted house as there is a group of killers looking make their nightmares and last moments a living hell as they are trapped with no escape. The film stars Katie Stevens and Damien Meffei.

The reason why this film is very good was the writing and directing from Scott Beck and Bryan Woods. One of the things that I liked about the direction is that they did a great job with the way they directed the action. This could have been one of those run of the mill haunted house film where there are some lags and boring moments but this film doesn’t because the action is intense and I liked the set designs in the film as it had that gloom and doom feel as it makes some of the intense scenes very gripping.

Beck and Woods also does a very good job in making sure that the acting in this film matches the intense action. The directors make sure their cast does a very good job with the way they approach each of their characters. It helped make this film feel like you’re on a thrill ride. Speaking of the performances, I liked how Beck and Woods did a very good job directing the villains in the film. From the movements to how each of the villainous characters deliver their dialogue, it made their characters feel scary and frightening. When that happens, it makes horror aspects work as you’re into the film and their performances.

The film also has a strong lead performance from Katie Stevens. She does a very good job with the way she portrays the film’s lead. Whether the story focused on the backstory of her character or whether she tries to escape the haunted house, she makes sure that it’s convincing enough that you’re drawn to the character. The performance is another thing that makes this film very entertaining and would love to see in more horror film as a lead actress.

The screenplay written by Beck and Woods was a thrill ride from start to finish. I liked how they allow the tension and claustrophobia to build up for the first half of the film. It allowed time to develop the main character and made the action later on in the film work so well. That is what makes horror films enjoyable to watch. Another thing that I liked about the screenplay was the fact they did a good job with the way that they spaced everything out. The story moved at a very good pace as it takes it time developing everything. Whether it was the kill scenes to some of the main character’s backstory, everything is spaced out very well that I could sit and enjoy this film right up to its kick ass conclusion.

It seems the last couple of years have produced some very good Halloween themed horror film that are worth seeing every Halloween season as “Haunt” is no different. With its intense action and creepy villains, “Haunt” will be on my Halloween viewing list for years to come. I hate to give back to back five star reviews as I did with “Ready of Not” where you can find on Film-Arcade.net’s sister site Anthony T’s Horror Show but I’m enjoyed “Haunt" and its highly recommend viewing for this Halloween season.