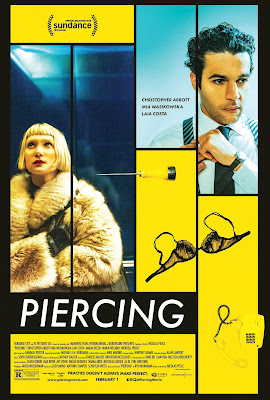 Universal Pictures recently released the official trailer for their upcoming release of "Piercing". The film stars Christopher Abbott (It Comes At Night, “The Sinner,” “Girls”) and Mia Wasikowska (Crimson Peak, Stoker, Alice In Wonderland) and is directed by Nicolas Pesce (The Eyes of My Mother).

PIERCING features ground breaking performances by Christopher Abbott (It Comes At Night, “The Sinner,” “Girls”) and Mia Wasikowska (Crimson Peak, Stoker, Alice In Wonderland). The film is the second feature film for writer and director Nicolas Pesce who previously received critical acclaim for his debut feature film The Eyes Of My Mother. Pesce is in post-production on his next film – the reboot of the Grudge.

SYNOPSIS: In this twisted love story, a man seeks out an unsuspecting stranger to help him purge the dark torments of his past. His plan goes awry when he encounters a woman with plans of her own. A playful psycho-thriller game of cat-and-mouse based on Ryû Murakami’s novel.