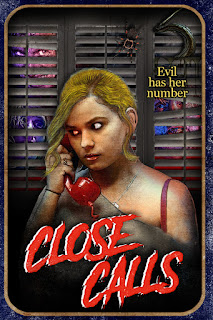 It’s been a while that I’ve written a review given everything going on but couldn’t resist when reviewing when I heard about this film. I was first interested in reviewing this when I heard about it getting released by Scream Team Releasing which is my favorite indie horror label at the moment plus it had a cool premise. The film is about a teenager who is spending the night at home with her sick grandmother after she gets into an argument with her father. She starts to receive mysterious phone calls. This starts to drive her insane as she thinks that someone is stalking her and begins to feel like everyone is against her. Is this in her mind or is there truly someone out to get her?

The month of January usually is filled with films that you will forget by the end of the year. Very rarely do you get a film that you would consider for a best of list in January. Close Calls is that rare case as I liked this film a lot.

One of the things that makes “Close Calls” very good was the fact that writer/director Richard Stringham’s direction was very good. Whether it’s the way that he and his cinematographer Craig Wynn made the look of the film so dark to how Stringham keeps the action moving, it really is one of those films that keeps you on edge. He does that so effectively as it made the two hour run time go by at a good pace. This is an achievement that should be noted as I’ve seen many independent horror films go over ninety minutes in the past and most of them end up falling flat. Look at “Gehesha: Where Death Lives” as a great example. The other thing that makes this film good was the way Stringham directs his cast. He does a very good job making sure that he gets the performances that he needs to makes his work. Stringham makes sure that there is chemistry between the cast as it helped kept my interest in some of the films long dialogue scenes. This also helps the film overall especially with its long running time.

Speaking of the performances, I thought they were good but the one that stands out from the rest is Jordan Phillips’ performance as the lead character in the film. She does a very good job making her character work so well. Whether it’s the action scenes in the film’s final act to the way that she brings the character to life, Phillips brings a level of personality and intensity in the way that she approaches her character as it keeps you interest in the film’s story. I would like to see her get another leading role in the future as she definitely an actress to keep an eye in the indie horror genre.

Stringham’s screenplay was very good. I liked how this screenplay goes for more a Lucio Fulci/ Italian horror film type feel with the film’s story. This story felt like it had some inspirations from Fulci films such as “The Beyond” and “The House by the Cemetery” It made for some very weird and horrifying moments. This is definitely something you often don’t see that from American filmmakers. The other thing that I liked about the screenplay was the fact that it does a great job focusing on the main character. Whether it’s the problems that she has with her father to her being stalked, everything is done so well that it kept me engaged with the lead character and the film’s story.

Before I wrap up this review, Rocky Gray’s score was great here. It was one of those score that adds to film. I liked how it had that retro 80’s / Frizzi vibe going for it. It added to the film’s dark and dreadful tone which is needed for a film like this. I hope this soundtrack gets released on mp3 download as this is a great score and my favorite of his.

If you’re a fan of 70’s and 80’s Italian horror, this is definitely a film that you should check out as this has great direction from Richard Stringham and a great performance from Jordan Phillips. “Close Call” is a surreal and intense film that will make you fear picking up the phone every time the phone rings.