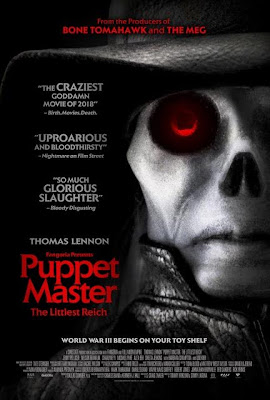 It’s been a while since I had the chance to write a review with all the stuff happening in Film-Arcade.net’s sister site Anthony T’s Horror Chamber. Why not start off my return to writing reviews with what I have to say one of the year’s most controversial horror films of the year, “Puppet Master: The Littlest Reich” which is being co-produced by Fangoria.

The film is about a comic book creator (Thomas Lennon) who returns home to his parent’s house after being divorced and dealing with the death of his brother. When he goes to his brother’s room, he finds a puppet stored in a box made by the infamous Andre Toulon. He realizes that he can sell it at the 25th anniversary convention celebrating the infamous Toulon murders at a hotel. So he brings his best friend and new love interest along. Soon, the puppets come to life and unleashes a wave or carnage that hasn’t been seen in any Puppet Master” film. Now, he must find out what makes the puppets come back to life and stop it before they kill everyone in the hotel. The film also co-stars Michael Pare, Charlyne Yi, Barabra Crampton and Udo Kier.

If you’re going into this Puppet Master thinking that it would be like the original Full Moon series, then you will be very disappoint as the magic of those films are replaced with shock and awe. Still, this “Puppet Master: The Littlest Reich” is a very good film as this the most horrific killer toy film that I ever seen.

The film directed by Sonny Laguna and Tommy Wiklund goes a very good job providing bloody action and shocking moments. One of the things that made this good was the fact that both directors made sure to keep the action moving. Whether it was the way that they directed the death scenes to how they handle the action especially with the puppet movements, everything is done in a way that it gives you a shocking and gory feel that quite frankly I’m not used to seeing in a Puppet Master film. It made this film entertaining and serious as there were some of the scenes that had a horrific and Troma like feel to it. The other thing that makes Laguna and Wiklund’s direction was the fact that performances were very good. They make sure that the performances had a serious tone while maintain the cast chemistry. It made the characters interesting and help moved the shocking tone along which made it feel different compared to other Puppet Master films. This film also has a very good lead performance from Thomas Lennon which also help made this very good.

But if there is one thing that made this film great, it was the film’s haunting score by Italian Composer Fabio Frizzi. Yes, the same one behind the scores of Fulci’s “Zombi 2” and “The Beyond”. He does a great job making sure the score had a very dark and creepy feel to it. It helped drive the film’s sinister tone which made the film darker than Richard Band’s original score. I would put up with there with some of his Fulci scores as his best work.

The one thing that I worried about this film was the fact that the screenplay was written S. Craig Zahler. Given his track record and the fact that I read reviews making me thing that this film was going into Troma territory and that it wouldn’t work considering I’m a major fan of the Puppet Master series. While it has material that might be considered offensive to some, for me it worked enough that I had a good time with this film even though the material felt overkill especially in the first half of the film.

What I liked about the screenplay was the fact that it does a very good job with the way that it builds up it’s lead character. I liked how Zahler does a very good job making sure that Thomas Lennon’s character is likeable. Whether it’s the way that he develops the character or making sure he is the focal point, it made the character interesting enough that I was interested in the character. The other thing that made the screenplay really good was the fact that this had a comic book like feel to it. Whether it was the over the top violence, or the film’s opening credits or the way this film ends, it gave a feel that you were in a comic book at times which made it different from the original films.

“Puppet Master: The Littlest Reich” is definitely not a film for everyone. With over the top gore, intense action and a great score, this is a film will shock you and leave you wanting more.