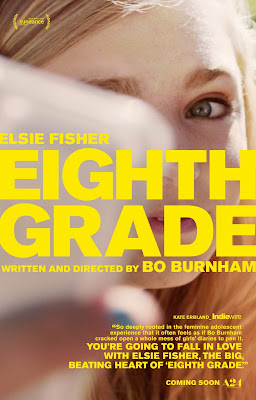 A comedy-drama about an extremely insecure teenage girl who's struggling with social acceptance, while finishing her last week of eighth grade and preparing for high school. The film was written and directed by actor turned first time feature filmmaker Bo Burnham. It stars Elsie Fisher, Josh Hamilton, Emily Robinson and Jake Ryan. The movie has received nearly unanimous positive reviews from critics, and I was pretty blown away by it as well!

Kayla (Fisher) is an introverted and extremely insecure teenage girl, who's preparing for high school. She doesn't have any friends, but she really wants them, and she spends most of her free time on social media, and making YouTube videos explaining her social issues to others. Her father, Mark (Hamilton), constantly tries to help her, while still trying to keep the distance from her that Kayla desires. The entire film takes place during Kayla's last week of the eighth grade.

The movie is a beautiful examination of what it's like to be a social outcast trying to fit in in middle school. I remember what that's like very clearly, obviously not from a teenage girl's point of view, but I still found almost everything presented in the film to be really relatable. It's funny, and completely believable. It's also very heartbreaking, charming and touching; I cried tears multiple times while watching it. I definitely highly recommend it, to everyone.
at 1:58 PM
Labels: A24, Eighth Grade, Reviews