"Sicario: Day of the Saldado" Review by Tim Hellman 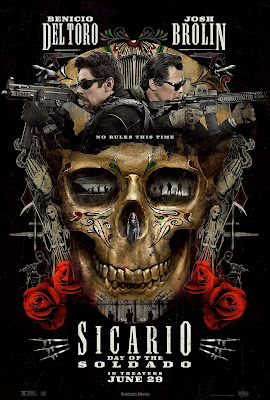 'SICARIO: DAY OF SALDADO': Four and a Half Stars (Out of Five)

The sequel to the 2015 hit crime-thriller 'SICARIO'. This one has Benicio del Toro and Josh Brolin reprising their roles as hitman Alejandro Gillick and CIA agent Matt Graver, who must team up to stop Mexican drug cartels from smuggling terrorists across the U.S. border. It costars Isabela Moner, Jeffrey Donovan (also reprising his role from the original), Catherine Keener, Manuel Garcia-Rulfo, Matthew Modine and Shea Whigham. The script was once again written by Taylor Sheridan, and the film was directed this time by Stefano Sollima. It's received mostly positive reviews from critics, although not as good as the acclaimed original. I really enjoyed it as well, although not quite as much as the original also.

Mexican drug cartels have been smuggling suicide bombers across the border, into the U.S., and CIA agent Matt Graver (Brolin) is tasked with stopping them. He brings in former undercover operative, turned mentally unstable hitman Alejandro Gillick (del Toro), to help him. They kidnap the young daughter of a drug lord, named Isabela Reyes (Moner), in an effort to cause war between the rival cartels. Things get out of control with the Mexican police, and the girl makes a run for it. Gillick is tasked with bringing her back.

The movie is intense almost for it's entirety. Some scenes go on a little too long, but it's mostly a pretty nonstop thrill ride. Del Toro and Brolin are both great in their roles, and the music score is absolutely awesome. The absence of Emily Blunt's character is a noticeable lesser quality to this sequel though, and it just isn't quite as original or shocking. It does just about as much as a good sequel can do though, and I look forward to seeing another one.
at 7:57 PM
Labels: Bencio del Toro, Josh Brolin, Reviews, Sicario: Day of the Saldado, Sony Pictures