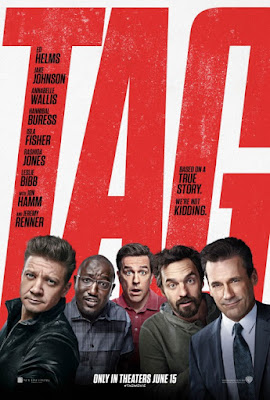 A comedy about a group of adult men that have spent the month of May, every year, playing the game of tag since they were children. The film was directed by debut feature filmmaker Jeff Tomsic, and it was scripted by Mark Steilen and Rob McKittrick (who also wrote and directed the outstanding 2005 comedy 'WAITING'). The story was inspired by a Wall Street Journal article, written by Russell Adams. It stars Ed Helms, Jeremy Renner, Jon Hamm, Jake Johnson, Hannibal Buress, Isla Fisher, Annabelle Wallis, Rashida Jones and Leslie Bibb. It's received mostly positive reviews from critics, and it's a modest hit at the Box Office as well. It's entertaining enough I'd say.

Hoagie (Helms), Jerry (Renner), Bob (Hamm), Randy (Johnson) and Kevin (Buress) have been playing the same game of tag since they were nine-years-old, always all through the month of May. For thirty years it's the one thing that's always brought the close friend group back together. Jerry has never been tagged, and he's about to be married. So he's quitting after this year. The other friends decide to team-up, in order to obsessively try and finally tag him.

The movie has a great premise, and a great cast. It seems like Helms is cast in so many buddy comedies like this, but he never truly gets the credit he deserves for them. Renner is brilliant casting as well, and Hamm and Johnson just seem natural in their roles too. Buress is good, but he's not given enough to really do. The film is funny, but the tag scenes are a little too over-the-top for me. It feels like a slapstick action flick at times, and it's better as just a buddy comedy. The film is definitely no soon-to-be-classic (like it feels like it really wants to be), but I think it's definitely still worth seeing.
at 9:17 PM
Labels: Ed Helms, Jeremy Renner, Jon Hamm, Reviews, Tag, Warner Brothers