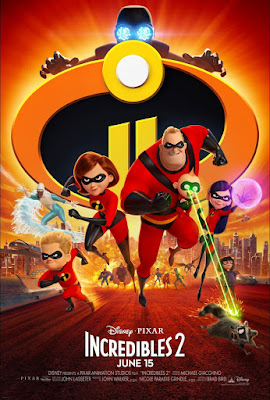 'INCREDIBLES 2': Four Stars (Out of Five)

Pixar and Disney's long anticipated sequel to their 2004 animated superhero blockbuster 'THE INCREDIBLES'. The plot follows the Parr family once again, as they battle a new enemy, who wants to turn the public against all 'supers', while they also try to deal with normal family life as well. The film was once again written and directed by Brad Bird, and it features returning voice cast members including Craig T. Nelson, Holly Hunter, Sarah Vowell and Samuel L. Jackson. Huck Milner, Catherine Keener, Bob Odenkirk, Sophia Bush and Bill Wise also join the cast this time. The movie has received nearly unanimous positive reviews from critics (like it's predecessor), and it's also expected to be a huge hit at the Box Office once again as well. I enjoyed it, but definitely not as much as the original.

The Parr family is still acting as the superhero team known as 'The Incredibles' when the authorities become too concerned about the damage being done during their battles with supervillains, and the team is ordered to halt their actions. Then they're contacted by a superhero fan named Winston Deavor(Odenkirk), and invited to his house for a proposition, along with their friend Frozone (Jackson). There Winston and his sister Evelyn (Keener) offer Helen Parr (Hunter) a superhero job fighting crime, in order to win back the support of the public. Helen accepts the job offer, and Bob Parr stays home to watch the kids while she works. Helen has to battle a new supervillain in the process, and Hank finds parenting even harder than crime fighting, especially when he learns their baby Jack-Jack has even greater superhero powers than they all do.

The movie is really well made once again, and always beautiful to watch. The action scenes are mostly exciting too, and the humor is clever and witty (all once again). It's also great how progressive these films are, especially this time having the wife superhero be the one fighting crime, while the husband stays home to watch the kids. Of course he also finds parenting to be even harder than crime fighting too. That's all great about this movie, but it still didn't live up to my very high expectations of matching the original (or even coming close to it). It doesn't capture the same magic, and after the original film was so refreshing and somewhat groundbreaking at the time of it's release, there wasn't much this sequel could do to live up to it of course. It's still really well made though, and entertaining enough.
at 7:18 PM
Labels: Incredibles 2, Pixar, Reviews, Samuel L Jackson, Walt Disney Pictures