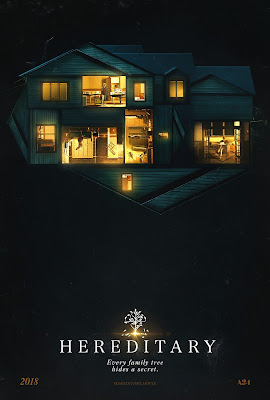 'HEREDITARY': Five Stars (Out of Five)

The new critically acclaimed horror flick about a family that begins to experience supernatural hauntings, after the death of their estranged grandmother. The film was written and directed by debut feature filmmaker Ari Aster, and it stars Toni Collette, Alex Wolff, Gabriel Byrne, Milly Shapiro and Ann Dowd. The movie is a modest hit at the Box Office, and it's also gotten nearly unanimous positive reviews from critics. I absolutely loved it!

After the death of their reclusive grandmother, the Graham family begins having disturbing (and quite terrifying) experiences. They also learn more about their mysterious ancestry, as depression sets more and more in for some. Severe mental illness also begins to cause havoc for the Graham family,especially for the mother, Annie Graham (Collette). The shocking death of yet another family member soon leaves Annie at a mental breaking point too, and the rest of the family begins feeling haunted as well.

The film is one of those hauntingly memorable horror flicks, that's so well made that it will leave you creeped out and disturbed for days after you leave the theater (at least if you're someone that's sensitive like me). I love horror films, and I really respect a movie that can make me feel this way. The climax and the ending of the film are so classic, and masterfully effective, that I ultimately had to give the movie the highest rating possible as well. Collette also gives one of the best performances of the year so far too. The film truly is a must see for any die-hard horror fan, or just a movie lover in general as well!
at 6:50 PM
Labels: A24, Hereditary, Reviews, Toni Collette