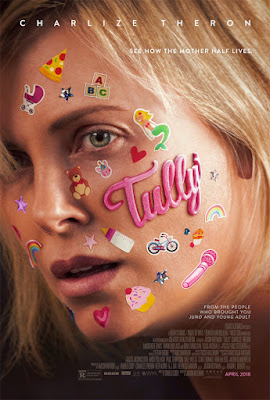 A comedy-drama starring Charlize Theron as a mother of three (including a newborn baby) who is gifted a young nanny by her brother. The story focuses on the two women's relationship. It was directed by Jason Reitman, and it was written by Diablo Cody; the two previously worked together (in the same duties) on 2011's 'YOUNG ADULT' (also starring Theron) and 2007's 'JUNO'. The movie also costars Mackenzie Davis, Ron Livingston and Mark Duplass. It's received nearly unanimous positive reviews from critics so far, and I enjoyed it as well.

Marlo (Theron) is an emotionally struggling and overworked mother of three, including a newborn baby. Her husband, Drew (Livingston), is also very busy with work, and he's unable to help with the kids at all (or so he says). Marlo's brother, Craig (Duplass), offers to pay for a night nanny for the children, so that Marlo can get some more rest. Marlo is at first very resistant to the idea, but she eventually gives in to it. Once she meets the nanny, named Tully (Davis), a very unusual relationship develops between the two women.

The movie is a pretty serious and depressing look at motherhood, and getting older. There is some optimism in it, but ultimately it's pretty gloomy. The film also has a pretty surprising twist at the end, and some insightful commentary on sleep depravation and mental illness (two serious issues that I often battle with regularly as well). Theron gives another great performance in it too. Overall I'd say the movie is really well made and effective. It's not as fun or entertaining as 'JUNO' or 'YOUNG ADULT' though.
at 5:27 PM
Labels: Charlize Theron, Diablo Cody, Focus Features, Mark Duplas, Reviews, Tully