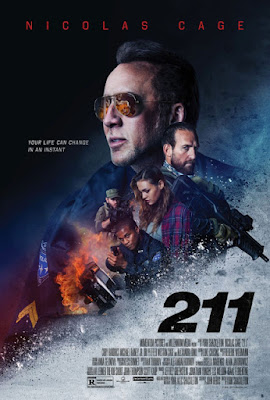 "211" hits theaters in limited release and VOD on June 8th.

Inspired by one of the longest and bloodiest real-life events in police history. Officer Mike Chandler (Nicolas Cage) and a young civilian passenger find themselves under-prepared and outgunned when fate puts them squarely in the crosshairs of a daring bank heist in progress by a fearless team of highly trained and heavily armed men.

The film was inspired by a real bank robbery that happened in Los Angeles in 1997 referred to as the Battle of North Hollywood. The shootout was an armed confrontation between two heavily armed bank robbers and the Los Angeles Police Department. In the end, perpetrators were killed, twelve police officers and eight civilians were injured, and numerous vehicles and property destroyed by the nearly 2,000 rounds of ammunition fired by the robbers and police. Due to the large number of injuries, the number of rounds fired, the weapons used, and overall length of the shootout, it is regarded as one of the longest and bloodiest events in American police history. The incident sparked debate on the need for patrol officers to upgrade their firepower in preparation for similar situations in the future. It marked a significant time, as before this bank robbery police officers had never used assault weapons. Standard issue side arms carried by most local patrol officers at the time were 9mm pistols or .38 Special revolvers with some patrol cars equipped with a 12-gauge shotgun. When this robbery happened, the bank robbers went in so fully armed that the police were under-prepared and outgunned. Afterward, law enforcement ended up changing a lot of their rules so officers could carry heavier weaponry with them.