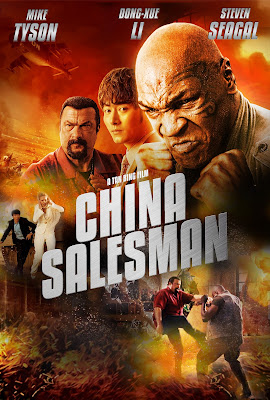 CHINA SALESMAN stars Mike Tyson, Steven Seagal, Dong-Xue Li, Janicke Askevold and Li Ai, with Eriq Ebouaney rounding out the cast. It was produced by China's Wanda Corporation, and written and directed by Chinese filmmaker Tan Bing. The film, with a reported budget of over $20 million, premieres theatrically this spring and had previously been a high profile title at last year's AFM.

Based on a true story, CHINA SALESMAN is a film about the dangerous and epic adventure to Africa where a Chinese engineer/salesman comes face-to-face with a corrupt competitor over the contract for the first African mobile telecom technology. Local tribesman Kabbah (Mike Tyson) and mercenary Lauder (Steven Seagal) get drawn into the conflict in a classic, brutal hand-to-hand fight while the entire country faces civil war battles.