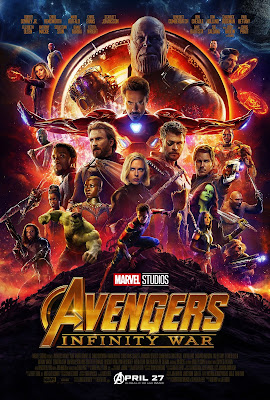 Before I go into this column I want to let DC fans know that I’m not taking shots at the fanbase as I like DC too as well as Marvel and respect the DC fanbase but I was so infuriated at DCEU’s most recent film “Justice League” and the fact the Marvel recently released "Avengers: Infinity War" that I needed to write an analysis piece about the cinematic war between Marvel and DCEU and three reason why Marvel Cinematic Universe is crushing the DCEU because this should not be happening as competition is good and the viewers win.

Recently, I decided to rent Justice League even though the word of mouth was bad. I should have listened because this was a total disaster from start to finish. At least I did not buy the qblu-ray, unlike “Batman vs Superman”. This film rushes through everything from character development to how it sets up the conflict. It was so bad that it led to a twitter rant on my personal twitter page. Then a day later, I had the idea to write about how Marvel is succeeding while DC/ Warner Bros are falling flat.

1. Marvel does a great job building its universe while DCEU is a rush job.

The first films to start this comic book film craze was 2008’s Iron Man and The Incredible Hulk. From there, Marvel would release “Iron Man 2 (2010), Thor (2011) and Captain America: The First Avenger (2011). If you count that’s five solo Marvel films before “The Avengers film in 2012. That’s what made the first superhero team up film feel special. On the side DC and its parent company Warner Bros didn’t start their DC universe until 2013’s “Man of Steel. It took from May 2nd,, 2008 when the first Marvel film was released to Jun 13th, 2013. That’s five years before the DCEU first film screened. They should’ve seen the signs that Marvel was making a major move in film market back after the first Iron Man film. You don’t give a competitor a five year head start in the film world and expect you’re comic universe to compete because at that point you have to go full speed ahead and the quality of the films suffer. It’s happened to all of their films except “Wonder Woman”. There was also no real build up to “Justice League”. You had “Man of Steel”, “Batman vs Superman” and “Wonder Woman” before “Justice League”. Sorry, but it’s hard to be excited for a superhero team up film when you’re missing three other films make up you’re superteam film. This made Aquaman, Cyborg, and The Flash feel like minor characters on that team instead of equal characters like they are supposed to be. It made their introductions feel so rushed that I don’t know if I care to see a standalone film of each of those characters. At least, Black Widow (Iron Man 2) and Hawkeye (Thor) made appearances before Avengers so you knew something about their characters going into Avengers. In Justice League, you’re meeting those characters for the first time which gave me no investment in those characters as their backstories were rushed.

2. Disney Stays out of Marvels way while Warner Bros has their fingerprints on DC films.

This is the main reason why Marvel does a great job. In my opinion, Disney allows the studio to control every aspect of production include choice of directors, casting and story. It allow for their films to have an authentic feel to them because most of the directors involved love the source material that their directing and it shows on screen. Never would’ve you see seen James Gunn (Slither, Super) and Taiak Waititi (What We Do in the Shadows) be in control of these films ten years ago and done a great job with their film as it looks like it’s done with little to no inference. It allows for Marvel’s characters and its films to feel special.
DC Characters on the hand don’t feel special at all. They feel dreary and dull as Warner Bros have no idea on how comic book characters work. It feels like there’s no creativity or fandom in their films. With the exception of Wonder Women, every recent DC film feels like it was made in the Warner Bros boardroom and handled by people who aren’t passionate with the source material and are there to cash a check. Warner Bros needs to stop meddling in these films and hire people who are passionate about these characters to write and direct these films and do it the same way that Marvel handles everything.

3. Marvel Making Great Out of the Box Decisions while Warner Bros give Zack Synder the Keys to Start the DCEU.

Marvel does a great job with all these out of the box decision that you wouldn’t think would work but they do it very well. Whether it’s casting or choice of directors, they’ve for the most part always have hit a home run. Whether its casting unknowns like Chris Evans, Chris Pratt or Chris Hemsworth to play three of the main characters in the their universe to hiring directors like Kenneth Branagh (Hamlet) James Gunn (Super), Anthony and Joe Russo (Welcome to Collinwood), Jon Favreau (Made) and Ryan Coogler (Fruitvale Station), you wouldn’t think could pull off a comic book film and do it so effectively or be even be associated with the Marvel Universe. But they’ve been all great additions. On the other hand, the DCEU has felt like the Zack Snyder show as he’s directed “Man of Steel”, “Batman vs Superman” and Justice League”. All of them have been failures. Thankfully, he’s being relegated to executive producer for the upcoming DCEU films but not good enough. He needs to be completely gone as the only film in the DCEU that was a hit at the box office was “Wonder Woman”. I don’t know if he’s a fan or he figures the DCEU is going to be his cash cow where he is ordered Warner executives to produce films that have no connection with movie goers and feel dreadfully dark. I know sometime Marvel’s films can be dark, but they manage to add humor to go with a dark tone. The DCEU films are very dark and brooding. That’s something that hurt both Superman and Batman which I can’t believe, since I love the character so much but Ben Affleck has been a terrible Batman. If they were going to go this way from the start, give the keys to Christopher Nolan. He knows how to do this material very well and effectively. Zack Synder does not and that is what’s hurt the DCEU.

Please note that I did some research on dates and film catalogs and apologies if there are any mistakes in this article. Let me know and I’ll correct them.
at 8:22 PM
Labels: Articles, DC Comics, Marvel Studios, Warner Brothers