"Life of the Party" Review by Tim Hellman 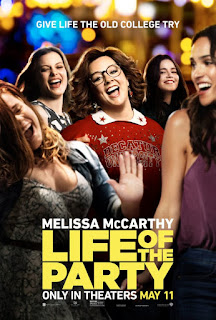 'LIFE OF THE PARTY': Three Stars (Out of Five)

A comedy about a recently divorced mother who decides to go back to college, and then ends up in her daughter's class (much to her daughter's disappointment). It stars Melissa McCarthy, Molly Gordon, Gillian Jacobs, Maya Rudolph, Julie Bowen, Matt Walsh, Stephen Root and Jacki Weaver. The film was directed by Ben Falcone (who also directed his wife, Melissa McCarthy, in the comedy hits 'TAMMY' and 'THE BOSS'), and it was written by the married couple. The movie has received mostly negative reviews from critics, but it is expected to be yet another hit at the Box Office for McCarthy and Falcone. I found it to be really uneven, and hit-and-miss with laughs.

As Maddie Miles (Gordon) goes off to college, her father, Dan (Walsh), tells her mother, Deanna (McCarthy), that he wants a divorce. Heartbroken, Deanna decides she wants to go back to college, since she quit school a year before graduation (when she became pregnant with Maddie). By going back to school Deanna feels liberated for the first time in her life, and she begins partying with Maddie's friends and sleeping with a college student half her age. She of course finds happiness, and her true self in the process.

The film is really funny in places, and then not funny at all in other places. At times it's even painful to watch (how bad it is), and then moments later it's hilarious again. I've seen a lot of comedies like this, and of course they're hard to overly recommend, or discourage people from seeing. It's definitely good for at least some good laughs, and it's a feel good/positive movie too. It's not as good as 'TAMMY', or McCarthy's best films definitely though.
at 5:34 PM
Labels: Life of the Party, Melissa McCarthy, New Line Cinema, Reviews