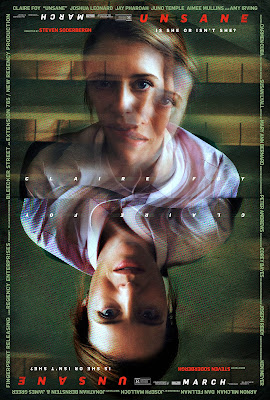 'UNSANE': Three Stars (Out of Five)

The new psychological horror flick from director Steven Soderbergh, all shot on an iPhone 7 Plus! It was written by Jonathan Bernstein and James Greer, and (like most Soderbergh movies) it's received mostly positive reviews from critics. The film stars Claire Foy, Joshua Leonard,Jay Pharoah, Juno Temple, Amy Irving and Aimee Mullins. It tells the story of a young woman being stalked by her ex, who's involuntarily committed to a mental institute, and once there she has troubles distinguishing reality from her nightmares. I wasn't very impressed by it.

Sawyer Valentini (Foy) is a successful businesswoman who's being stalked by her ex-boyfriend (Leonard), or at least she thinks she is. She attends a support group, for people suffering from stalking, and realizes that she's involuntarily signed herself into a mental institute. While she desperately tries to escape, Sawyer realizes her ex is now working for the institute as well, or at least she thinks he is. She continues to have troubles distinguishing reality from her nightmares though, as her fears become much more intense, and it appears that her ex is seriously trying to harm her.

The film feels really low-budget and somewhat cheesy, like a bad B-movie in my opinion (even though Matt Damon does make an appearance). The acting seems really corny and bad, and it's also confusing keeping up on the difference between apparent reality and imagination. In the end I guess we kind of know, but I'm still not even sure. I think Soderbergh does save the film from becoming a truly bad movie, and he makes it somewhat mildly amusing and interesting, but it's still mostly just a waste of time though.
at 6:16 PM
Labels: Bleecker Street Productions, Fingerprint Releasing, Reviews, Steven Soderbergh, Unsane