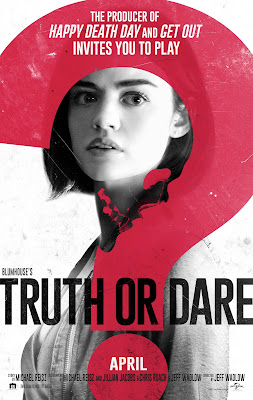 TRUTH OR DARE': Three Stars (Out of Five)

A supernatural horror flick about a normal game of truth or dare that turns deadly when something begins killing those who cheat at the game. It was directed by Jeff Wadlow (who also helmed the genre flicks 'KICK-ASS 2' and 'CRY WOLF'), and it was scripted by Wadlow, Michael Reisz, Jillian Jacobs, and Chris Roach. The movie stars Lucy Hale, Tyler Posey, Violett Beane, Hayden Szeto, and Landon Liboiron. It's received mostly negative review from critics, but it has performed really well at the Box Office so far though. I found it to be very mildly amusing.

Olivia (Hale) gets talked into going to Mexico, for vacation for a week, by her best friend Markie (Beane). Olivia secretly has a huge crush on Markie's boyfriend, Lucas (Posey), who Olivia is constantly cheating on. As their trip is coming to an end, the friend group is all talked into playing a game of 'truth or dare', while drinking one night. Later they learn that the game is actually being controlled by supernatural forces, which will kill them if they tell a lie or don't successfully complete a dare. All of their social drama also comes to light, as they're being killed, one by one, by a mysterious entity as well.

The movie is your pretty standard slasher flick. To it's credit, it's definitely pretty creepy and disturbing, but at the same time it's also pretty pointless, like a lot of similar horror films though. The film does accomplish what it sets out to do basically though, and it's not a bad movie in my opinion. I'd recommend seeing it, if you're a big fan of the genre, but probably not it you're not.
at 5:43 PM
Labels: Blumhouse Productions, Reviews, Truth or Dare, Universal Pictures