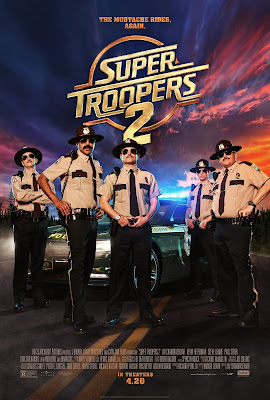 'SUPER TROOPERS 2': Four and a Half Stars (Out of Five)

The highly anticipated sequel (more than 17-years after the release of the original) to the beloved cult classic cop comedy 'SUPER TROOPERS'. This one has the team of troopers patrolling a newly disputed border area, between Canada and the U.S.. It once again stars the comedy team Broken Lizards (JayChandrasekhar, Kevin Heffernan, Steve Lemme, Paul Soter and Erik Stolhanske). The Lizards also once again co-wrote the screenplay, andChandrasekhar also once again directed the movie. It costars Brain Cox (reprising his role from the original as well), Emmanuelle Chriqui, Rob Lowe, Tyler Labine, Will Sasso, Hayes MacArthur and Lynda Carter. The film was funded by a highly successful Indigogo campaign, which currently ranks as one of the highest funded crowdfunding projects ever, and it's also the 7th largest successfully-completed Indiegogo project of all time! The movie is being released on 4/20, so fans can celebrate the weed holiday while also seeing the film at the same time. It's gotten mixed reviews from critics, but it is expected to do well at the Box Office (the theater I saw it at was pretty full). I really laughed a lot during it.

The state troopers (from the original film) have all been fired from their jobs, due to an accident with a ride-along involving actor Fred Savage (playing himself). They're offered their jobs back when there's a border dispute, between the U.S. and Canada, and a new patrol station is needed in the disputed area. The local residents there are not happy about it, at all, and a bitter rivalry erupts with the Canadian police that are already stationed there. Wacky antics of course continue between the 'super troopers' as well.

The movie is filled with pretty non-stop laughs. Some of the humor is a little too silly, or dull, but most of it really worked for me. I wasn't as big of a fan of the original as some people, but I haven't seen it in a really long time either, so I definitely can't say how well this one compares to it (without a doubt). I'm pretty sure though (from a well calculated guess) that it should please most fans of the original. I liked it a lot more than I was expecting to; from the opening scene (involving cameos by Sean William Scott, Damon Wayans Jr' and Clifton Collins Jr.) it's just a hell of a lot of fun!
at 5:46 PM
Labels: Fox Searchlight, Reviews, Super Troopers 2