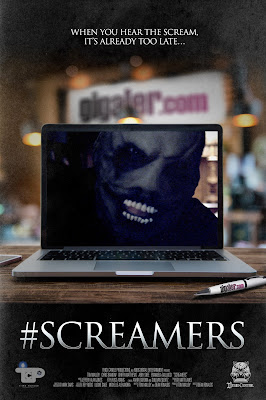 Technology seemed to be all over the place today where you can see a film on anything like you’re laptop, IPad, TV and Roku. For “#Screamers”, this is the first time that I’ve reviewed a film where I watched a film that I’m reviewing on my smartphone. The reason I bring this up is the film features a website and somewhat deals with online privacy.

The film is about the heads of an internet company and a couple of staffers that are looking for that one big story to make there site popular. One day, a mysterious video is sent to their site that manages to become their most viewed video. They set out to find the authenticity of the video, so that they can strike a business deal with the person behind the video. What they find is something very dark and sinister at work. Now, they are caught up in a nightmare that may never be broadcasted.

Found footage films tend to be hit or miss. There have been great ones like “Paranormal Activity”, “The Blair Witch Project” and “Cloverfield” and very bad ones that I won’t mention since they’ve buried from my mind because they are very bad. Thankfully “#Screamers” fall on the good side of things as I enjoyed this one a lot.

One of the things that makes this good was the directing. Director/co-writer Dean Matthew Ronalds does a very good job making sure the film is engaging considering that this is dialogue driven like most found footage films are. He makes sure that the scenes have a feel to them that you’re kept in story and the group’s quest to find out the truth about the mysterious videos. It made the scenes interesting as I was into the characters and their pursuit of the truth. The other thing that makes the direction very good was the fact he makes sure his cast is engaged with the material. In found footage films, if the cast doesn’t look engaged then the film suffers as there are a lot of dialogue scenes and you the viewer have to be into the characters. Thankfully the cast looked engaged as Ronalds makes sure that he gets the performances out of his cast.

The screenplay by Ronalds and star Tom Malloy works well here. I liked how the both of them did a good job setting up everything. Whether it was the way they set up the characters to the film’s chilling end, everything is done in a way that it kept the story moving and was entertaining. It made the film an interesting watch. The other thing that this screenplay does well was the payoff at the end. For a found footage film to work completely, the payoff has to be good. While this film has no gore and holds back on the action until the end, there were a couple of scary moments and a chilling end that makes the pay off work so well.

For found footage films, this one isn’t going blow anyone away, but it’s engaging and effective enough to make this an entertaining one. This is another good release from Dread Central Presents, as “#Screamers” will make you think twice before you click on a mysterious online video again.