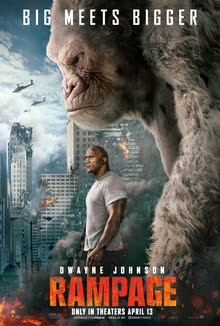 'RAMPAGE': Three and a Half Stars (Out of Five)

A sci-fi monster flick based on the popular video game, of the same name (by Midway Games), about a genetic experiment gone wrong that transforms a trio of animals into destructive monsters. Dwayne Johnson stars as a primatologist who tries to rescue an infected albino gorilla, which he had bonded with, and stop the other monsters from destroying the city. The film costars Naomie Harris, Jeffrey Dean Morgan, Malin Åkerman, Jake Lacy, P.J. Byrne and Joe Manganiello . It was directed by Brad Peyton (who previously teamed with Johnson on the 2015 disaster flick 'SAN ANDREAS'), and it was scripted by Ryan Engle, Carlton Cuse, Ryan J. Condal and Adam Sztykiel. The film has received mixed to negative reviews from critics, and it's expected to be a modest hit at the Box Office as well. I found it to be mildly amusing (at times) but mostly forgettable.

Davis Okoye (Johnson) is an animal loving primatologist in Rwanda, who's also the head of an anti-poaching team there. His best friend is an albino silverback gorilla named George (Jason Liles). When Davis learns that George has been infected by an unknown substance, and is growing at an alarming rate because of it, he teams with a genetic engineer, named Dr. Kate Caldwell (Harris), to try and help him. Then he learns that two other animals have been infected by the same experimental serum, and the trio are soon destroying the city. Davis does everything he can to save his friend, and stop the rampaging monsters.

My favorite parts of the movie are the animals, the animal/human relationships, and the monster fight scenes. I also found the battle scenes in the climax to be pretty amusing, and nostalgic, when they imitate the video game it's based on (which I played back in the day). All of the human stuff is mostly boring though. The Rock has a few good scenes in it, and Akerman makes a sexy femme fatale villain (Lacy is mildly amusing as her dimwitted brother too), but other than that the movie is pretty dull when it centers on the humans (and all the unnecessary plot nonsense). So some of the film is entertaining, and worth seeing, but most of it is annoying filler.
at 7:40 PM
Labels: Dwayne Johnson, Jeffery Dean Morgan, Malin Akerman, Naomi Harris, New Line Cinema, Rampage, Reviews, Warner Brothers