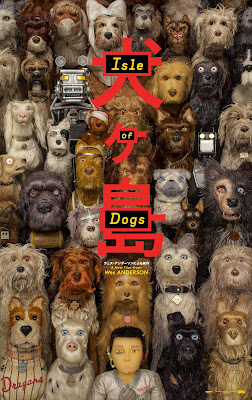 'ISLE OF DOGS': Four Stars (Out of Five)

The new stop-motion animated comedy from writer/director Wes Anderson (Roman Coppola, Jason Schwartzman and Kunichi Nomura also co-wrote the story). This is Anderson's second stop-motion animated film, following 2009's 'FATNASTIC MR. FOX'. The movie tells the story of a dystopian future Japan, where all dogs have been quarantined to a remote island, due to an extreme canine flu outbreak. A boy travelsto the island to find his dog, and he gets help form a team of dogs there. The film stars the voice talents of Bryan Cranston, Koyu Rankin,Edward Norton, Bill Murray, Jeff Goldblum, Bob Balaban, Scarlett Johansson, Kunichi Nomura, Greta Gerwig, Frances McDormand, Fisher Stevens, Tilda Swinton Harvey Keitel, Ken Watanabe and many others. It's received nearly unanimous positive reviews from critics (like nearly all of Anderson's movies), and it's playing in select cities now (like Portland). I enjoyed it, like I do all of Anderson's films.

All of the dogs in Japan have become infected with a severe canine flu, and the human population fears they'll catch it from them. So against dog lovers' (and animal activists') wishes, the canines are all quarantined to a remote island full of garbage. A group of rebel activists want to change this decision, and a young male activist, named Atari (Rankin), travels to the island to find his beloved dog there. A team of tough canines decides to help him.

The film is witty, funny and quirky (just like all of Anderson's movies). It's also got a great message about respecting dogs, and not taking them for granted. Being a vegan, I hope this message will translate to how we treat other animals as well (which is far worse), but I doubt it will. As a whole the movie is funny, and also bizarrely interesting (which is the same as all of Anderson's movies). I do like 'FANTASTIC MR. FOX' a little better though.
at 6:24 PM
Labels: Bill Murray, Bryan Cranston, Edward Norton, Fox Searchlight, Francis McDormand, Great Gerwig, Isle of Dogs, Jeff Goldblum, Reviews, Scarlett Johansson, Wes Anderson