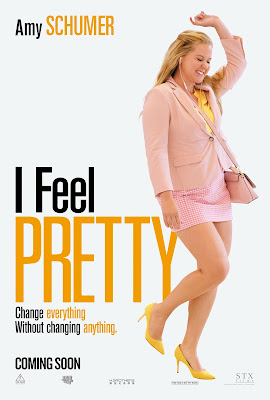 'I FEEL PRETTY': Four and a Half Stars (Out of Five)

The new comedy starring Amy Schumer as a severely insecure woman who suffers a head injury, while working out, and then suddenly thinks she's the most beautiful woman ever. The film also costars Michelle Williams, Rory Scovel, Tom Hopper, Aidy Bryant, Busy Philipps, Emily Ratajkowski, Lauren Hutton and Naomi Campbell. It was directed and co-written by Abby Kohn and Marc Silverstein (in their directorial debut); the duo has previously co-written such romcom hits as 'NEVER BEEN KISSED', 'HE'S JUST NOT THAT INTO YOU', 'VALENTINE'S DAY', 'THE VOW' and 'HOW TO BE SINGLE'. The film has received controversial criticism (from internet users) that it's guilty of body shaming (women that are larger than Schumer), and it's gotten mostly negative reviews from critics. It did surprisingly well at test screenings though (with actual moviegoers), and it's also performed well at the Box Office so far too. I really enjoyed it, and I also think it has a really inspiring and positive message.

Renee Barrett (Schumer) is really unhappy with her life; largely because she thinks that most people are 'looks prejudice' against her. She makes a wish to be undeniably beautiful one night, and then the next day she falls while working out, and suffers a severe head injury from it. When she comes to she actually thinks her wish came true, and she now sees herself as one of the most beautiful women in the world. Her enormous confidence then ends up attracting others, and it greatly helps Renee finally succeed at life (finally) as well.

I've been harassed and alienated because of my looks all of my life, and I know that most people are looks prejudice against me. So I could really relate to this film. It's a little cheesy in places, and some of it is definitely unrealistic, but it's still a really charming, uplifting and inspiring movie, with an awesome message. What happens to Renee (in the end) is of course not believable either, but it doesn't matter, the message still really works. I wouldn't say it's a hilarious film (if comedy is what you're looking for), but it is really funny as well. Most of all it's just a really heartfelt, inspiring and empowering movie!
at 2:33 PM
Labels: Amy Schumer, I Feel Pretty, Reviews, STX Entertainment