Check Out the Amazing Trailer from Stan Lee's Produced Comedy "The Concessionaires Must Die!" 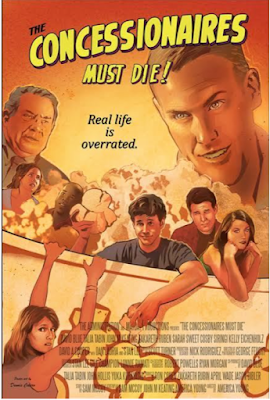 "The Concessionaires Must Die!" hits VOD on April 17th and DVD later this spring.

For more information on this film, you can visit the film's official website at: http://cmdthemovie.net/.

In THE CONCESSIONAIRES MUST DIE!, Scott Frakes (David Blue) is the first among equals in a group of movie- loving misfits that includes jaded and frequently intoxicated former child star Ashley (Talia Tabin), shy guy wingman RJ (Cosby Siringi), semi-clairvoyant projectionist Jon Dorn (John M. Keating), and embittered theatre owner Gabby (Zakareth Ruben). They all adore their iconic one-screen theatre, despite slow ticket sales and impossibly difficult patrons, and must band together to save it when a massive theatre chain opening across the street threatens to run them out of business. From BRAVEHEART to THE WRATH OF KHAN, and THE PRINCESS BRIDE to BATMAN BEGINS, THE CONCESSIONAIRES MUST DIE! is a subtle (and occasionally not so subtle) nod to fan favorites and nerd classics across all genres of cinema. Real-life comic book hero Stan Lee serves not only as Executive Producer of the film, but also turns in a trademark appearance as Scott’s Silver Age comic book- collecting grandfather. The Concessionaires Must Die! starts as an homage to comic books and classic movies but becomes its own real-life hero story.


"The Concessionaires Must Die!": Official Trailer