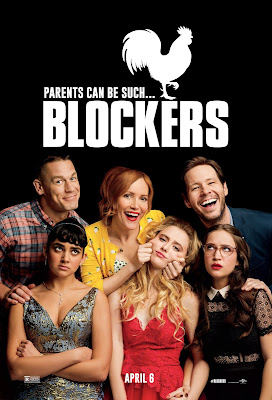 'BLOCKERS': Four and a Half Stars (Out of Five)

The new comedy about three parents trying to block their daughters from losing their virginity on prom night. It stars Leslie Mann, Ike Barinholtz, John Cena, Kathryn Newton, Geraldine Viswanathan and Gideon Adlon. The film was directed by debut feature filmmaker Kay Cannon, and it was scripted by Brian and Jim Kehoe. It's received mostly positive reviews from critics, and it's expected to do well at the Box Office as well. It's a really well made teen sex-comedy, with a refreshing gender twist and insightful parental relationship commentary.

Julie (Newton), Kayla (Viswanathan) and Sam (Adlon) have been friends since they were really young. Now their prom is coming up, and they've each decided they want to lose their virginity that night. The trio's parents (Mann, Barinholtz and Cena) discover the sex pact the girls have made, on Julie's open laptop. They decide they need to stop them, or cockblock them, and of course everyone learns a little bit about themselves, and bonds in the process.

The film is pretty consistently funny, not hilarious or laugh-out-loud usually, but the humor almost always works. It's really well written, directed and acted. Mann is fantastic in the lead, and Barinholtz is always hilarious in my opinion. Cena isn't a good actor, he's actually pretty bad, but he's good in the right roles (like this). He actually reminds me a lot of Dwayne Johnson in talent and skill range (in my opinion). The best part about the film though, is the drama (for me at least); I cried a little multiple times in it. The parents love for their kids, and other emotionalissues, are pretty touching. I also really like that it's a teen sex comedy from the girls points of view (which is rarely ever done). It's just an all around well made comedy flick, and a pretty good time at the movies.
at 8:14 PM
Labels: Blockers, John Cena, Reviews, Universal Pictures