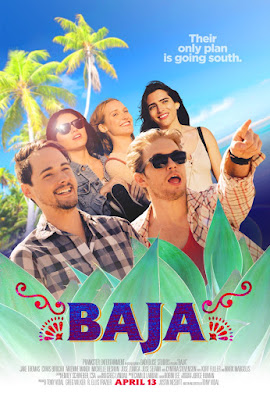 Lately, yours truly have been busy reviewing on Anthony T’s Horror Chamber and another website that I’ll talk about in near future. I’m been forgetting what made me enjoy films. It’s these small films that has gotten me to write about films. So when I heard about “Baja”, I figured that I give it chance as I haven’t reviewed a comedy in a long time.

The film follows a young adult who has to spend Christmas break driving his parent’s RV to Cabo. The ride there leads to some misadventures when his friend persuades him to bring two women along. This leads him to cross paths with a gangster who wants to some illegal cell phones transported which gets stolen and to make matters worse, the RV gets taken away. Now, he and friends must try and find a way to get back the RV before his parents notice. The film stars Jake Thomas, Michelle Deshon, Chris Brochu, Arienne Mandi, Kurt Fuller, Cynthia Stevenson and Mark Margolis.

There is an old saying, always leave a good first impression. In film terms in my opinion, it means always set up everything to keep a viewer’s interest. That includes the story, the characters and the pace of the film. It allows you to get into everything in the story. “Baja” does none of these as this felt like a film that rushes through everything. One of the main problems with this film was the fact that the direction was horrible. Writer/director Tony Videl doesn’t do a good job making sure the flow of the moved at a reasonable pace as it felt like everything was rushed. Whether it’s the dialogue scenes to how he directs his cast, nothing is done to slow his story. It hurts whatever humor this film had this looked like a mess. It also didn’t help that Robert Lee’s editing was awful. It was very distracting. The transitions between each scene felt too quick and sometime annoying that it ruined the flow of most of the scenes which made this mind numbing to watch. When that happen, it makes it tough to watch as I barely got through this film with its 106 minute running time. The cast in this film wasn’t that great neither. Most of it is not their fault as there is a lot of things wrong with this film but I wished they tried to make their performances stand out as I wasn’t into this film from acting stand point as well. It would’ve made bearable to watch if that happened.

Videl’s screenplay was atrocious as it started from the very beginning with the character introductions. It was like here’s one character, then the next minute there’s another character and so on. My preference is a full scene or two that takes its time introducing a character, not quick one minute scenes and then you’re supposed to like about the character. You need to do this aspect slowly to make a viewer like myself interested to the point that you’re into the film. This made me not become interested in these characters as it was going fast without slowing down which goes back to the introduction on my thoughts because this hurt the film. It also didn’t help that there was a little character development and the humor wasn’t that funny as it wasn’t a good time.

I was really hioping to have a good time with this film. Sadly, there was bad from the starts with an array problem that sinks this film. “Baja” is one destination that I’d wait to get out there as its directing, editing and screenplay sinks this film.