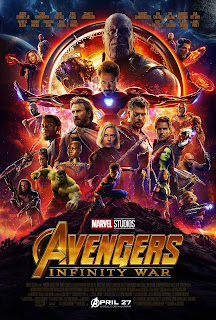 The third installment (not counting 'CAPTAIN AMERICA: CIVIL WAR') in the blockbuster superhero franchise, based on the Marvel Comics' characters. This one has the Avengers teaming up with the Guardians of the Galaxy, to stop Thanos from collecting all of the Infinity Stones so he can bend reality to his will. The movie was directed by Anthony and Joe Russo (who also both co-directed 'CAPTAIN AMERICA: WINTER SOLDIER' and 'CAPTAIN AMERICA: CIVIL WAR'), and it was scripted by Christopher Markus and Stephen McFeely (who also both co-wrote all of the 'CAPTAIN AMERICA' movies). It stars Robert Downey Jr., Chris Evans, Chris Hemsworth, Chris Pratt, Chadwick Boseman, Tom Holland, Benedict Cumberbatch, Mark Ruffalo, Zoe Saldana, Dave Bautista, Scarlett Johansson, Paul Bettany, Elizabeth Olsen, Don Cheadle, Anthony Mackie, Sebastian Stan and the voices of Josh Brolin, Bradley Cooper and Vin Diesel. It's received mostly positive reviews from critics, and it's expected to break all kinds of records at the Box Office of course. The movie is a pretty epic action flick, but it's a little light on actual character development and meaningful story.

The story begins two years after the end of 'CAPTAIN AMERICA: CIVIL WAR', and the Avengers are still not on speaking terms. Thanos (Brolin) has come to earth to collect the last of the Infinity Stones, which will allow him to form a gauntlet that can bend reality to his will. Hulk (Ruffalo) has arrived just before him, to warn Tony (Downey Jr.) about his plans. At the same time Thor (Hemsworth) meets the Guardians of the Galaxy, in space, and the Avengers must later team-up with them in order to stop Thanos, and save the universe.

The film definitely has a great epic feel to it, and look, and the action scenes are spectacular. There's way too many characters in the movie though, and each one has their own little story; which when added all together makes the whole film feel kind of pointless and empty. I'm sure nerd comic book lovers will still love it, and on a purely superficial/technical level it's quite a film-going experience. In the end though, it's all style over substance, and it's kind of like movie junk food with no real value. It is better than 'JUSTIC LEAGUE' at least though.
at 2:42 PM
Labels: Avengers: Infinity War, Benedict Cumberbatch, Chadwick Boseman, Chris Evans, Chris Hemsworth, Chris Pratt, Josh Brolin, Marvel Studios, Reviews, Robert Downey JR., Scarlett Johansson, Tom Holland