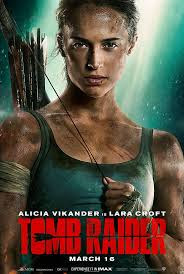 An action-adventure based on the popular 2013 video game, of the same name (both the game and the film are reboots of earlier hit series). The movie tells of the adventures of Lara Croft, now played by Alicia Vikander, as she struggles to solve the mystery of her father's sudden disappearance, 7-years earlier. The movie costars Dominic West, Walton Goggins, Daniel Wu and Kristin Scott Thomas. It was directed by Roar Uthaug, and it was scripted by Geneva Robertson-Dworet, Alastair Siddons and Evan Daugherty. The film has received mixed reviews from critics, but it's a huge hit at the international Box Office. I thought it was OK.

The story begins seven years after the disappearance of the successful archaeologist Lord Richard Croft (West). His daughter, Lara (Vikander), has still not accepted that he's likely dead, and she's now living a very carefree and wild life. Richard's business partner, Ana Miller (Scott Thomas), bails Lara out of jail, and convinces her to accept her inheritance. Lara reluctantly agrees, and upon doing so, she discovers Richard's last known whereabouts: off the coast of Japan, searching for a mythical tomb. Her fist 'tomb raiding adventure' begins, in search of her missing father.

The movie looks, and sounds, a lot more exciting than it actually is. Vikander is fantastic in the lead, and the visuals are stunning, but the film is still mostly just a bore. At least for me it was, but I'm getting more and more tired of most of Hollywood's big budget 'potential blockbuster' action movies. Some are really good, and I definitely still love a good exciting action flick (I grew-up on them), but this is not one of the especially good ones. Hopefully the first sequel is much better. I do think it's probably just as good as the Angelina Jolie films are though (although I don't remember much about them anymore).
at 6:16 PM
Labels: Alicia Vikander, Reviews, Tomb Raider, Warner Brothers