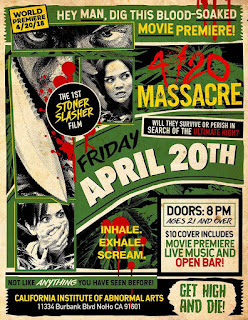 "4/20 Massacre will be screening at the California Institute of Abnormalarts in North Hollywood, California on 4/20 with more screenings during that week. The film will also be availiable on DVD and VOD April 3rd.

In addition to its DVD and VOD release, Dylan Reynolds’ 4/20 Massacre will also now get a theatrical release in Los Angeles from 4/20.

Following the premiere, the movie will screen at select times over the next week.

Suspense, smoke and spine-tingling chills are on the menu when horror icon Jamie Bernadette and Justine Wachsberger, star of the Divergent series, face a 4/20 Massacre.

The first-ever “stoner slasher” movie pits today’s hottest young stars against cinema’s next iconic movie monster in a frightening and funny comedy-thriller released just in time for the “The Official Holiday” for weed enthusiasts.

From writer/director Dylan Reynolds comes the story of five women who go camping in the woods to celebrate a friend’s birthday over the 4/20 weekend. But when they cross the turf of an illegal marijuana growing operation they must struggle to survive the living nightmare. 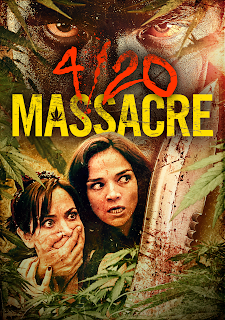