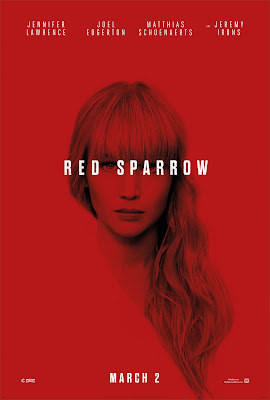 The new spy thriller starring Jennifer Lawrence as a Russian spy who falls for the CIA agent that she's assigned to seduce. The movie was directed by Francis Lawrence (who also teamed with Jennifer on three 'HUNGER GAMES' films), and it was scripted by Justin Haythe. The movie is based on the 2013 novel (of the same name) by Jason Matthews. Joel Edgerton, Matthias Schoenaerts, Charlotte Rampling, Jeremy Irons, Mary-Louise Parker, Bill Camp and Ciaran Hinds costar in the action flick. It's received mixed to positive reviews from critics, and it's also a modest hit at the Box Office as well. I enjoyed it.

Lawrence plays Dominika Egorova, a former professional ballerina dancer who's recruited to become a Russian spy. After some very brutal training, she's asked to make contact with a CIA officer, named Nathaniel Nash (Edgerton). In the process of seducing Nash, Dominika develops some very strong feelings for him as well. Things of course become complicated.

The film is extremely hard to watch at times; it's the ultimate #metoo story, and by the end of it you might end up hating all men. Jennifer Lawrence is fantastic in the lead. While it's true that her and Joel Edgerton have little chemistry together, their scenes are so limited that it doesn't really matter. There's some great spy movie twists, and thrills in it, too. The film is of course nothing too memorable, or awards worthy, but it is a well made (and very dark) spy thriller. There's also some really awesome female revenge scenes in it, and Jennifer Lawrence kicks some major ass!
at 7:09 PM
Labels: 20th Century Fox, Jennifer Lawrence, Joel Edgerton, Red Sparrow, Reviews