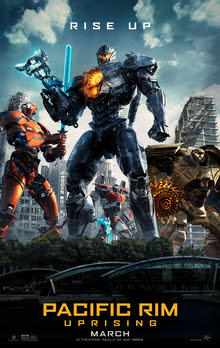 A sequel to the hit 2013 sci-fi monster flick 'PACIFIC RIM', which was directed and co-written by 2018's Oscar winning filmmaker Guillermo del Toro (who also served as a producer on this sequel). The film was co-written and directed by debut feature filmmaker Steven S. DeKnight (who's previously only helmed genre TV shows, like 'DAREDEVIL', 'DOLLHOUSE', 'SMALLVILLE' and 'ANGEL'). The story is set 10-years after the events of the original movie, when society is threatened by new Kaiju creatures, and a new younger team of Jaeger pilots must do battle with them. It stars John Boyega, Cailee Spaeny, Scott Eastwood, Jing Tian, Adria Arjona and Zhang Jin (in new parts); while Charlie Day, Rinko Kikuchi and Burn Gorman all reprise their roles from the original movie. It's received mostly positive reviews from critics, and it's a modest hit at the Box Office as well. If this chapter does good enough, many more sequels are planned (including spinoffs) to create a whole new sci-fi movie universe (similar to the 'STAR WARS' franchise). I enjoyed this film to an extent, but not as much as the original, I am still looking forward to more sequels though.

The story takes place ten-years after the Battle of the Breach. A Jaeger has gone rogue and is causing massive destruction. It appears as though someone, or something, has released more Kaiju monsters into the world. Jake Pentecost (Boyega), son of the late great Stacker Pentecost (Idris Elba in the first film), leads a new team of young Jaeger pilots to stop this new threat.

The movie definitely has some cool visuals, and some pretty awesome robot vs. monster fight scenes. Boyega is also very charismatic in the lead, although Eastwood kind of sucks as his rival, still the film is severely lacking what del Toro brought to the original. This movie has a very strong TV feel to it too, thanks to the inexperienced new director. If you're a fan of the 'DAREDEVIL' and 'DOLLHOUSE' type shows you might enjoy it, but I'm a movie lover (not a TV fan). I prefer quality over quantity, and this film definitely doesn't live up to it's predecessor. I am still looking forward to more future installments though, like I said, and hopefully they'll be much better than this.
at 7:50 PM
Labels: John Boyega, Pacific Rim: Uprising, Reviews, Scott Eastwood, Universal Pictures