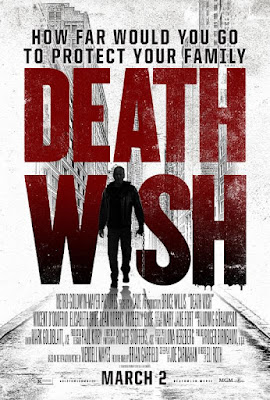 Director Eli Roth's remake of the popular 1974 vigilante action flick, of the same name, which was based on the book by Brian Garfield.  This redo was scripted by Joe Carnahan, and stars Bruce Willis (playing the iconic Charles Bronson role).  The story revolves around a Chicago doctor who becomes a violent vigilante, out for revenge, after his wife and daughter are brutally attacked by robbers.  The movie costars Vincent D'Onofrio, Dean Norris, Kimberly Elise, Beau Knapp, Ronnie Gene Blevins, Camila Morrone and Elisabeth Shue.  It's received mostly negative reviews from critics, and it's a modest hit at the Box Office as well.  I found it to be an effective genre flick, reminiscent of the popular hits form yesteryear, but it still could have been a lot better.

Dr. Paul Kersey (Willis) is a happily married doctor, who lives with his wife (Shue) and teenage daughter (Morrone) in Chicago.  Paul has gotten pretty used to the violent gang deaths in his city, seeing them regularly in his hospital every night, and has never thought of taking the law into his own hands (nor does he own a gun).  That all changes though, when his family is viciously attacked by robbers one night.  His wife is killed as a result of the attack, and his daughter is seriously injured.  When the police can't find who's responsible, Paul quickly becomes a violent vigilante out for revenge.

The movie does have a very strong 80s/90s B-action flick feel to it, and I think Roth was the perfect director to give it that feel.  Also Willis is the perfect actor to star in a film like this, that's still around right now that is (with just a few other rivals).  So fans of that style of movie should probably really enjoy it.  It does seem kind of weird though, how it almost feels like it's promoting buying a gun, and taking the law into your own hands (at a time like this).  I think the film actually does a good job of arguing why it's wrong too though.  I also feel like the movie could have used a lot more passion; I didn't really feel Willis's raw emotions, or anger, like I think I should have.  I also didn't hate the bad guys nearly as much as I should have either.  Still, it's a fun (and nostalgic) B-action flick.
at 5:38 PM
Labels: Bruce Willis, Death Wish, Eli Roth, MGM, Reviews