"The Maze Runner: The Death Cure" Review by Tim Hellman 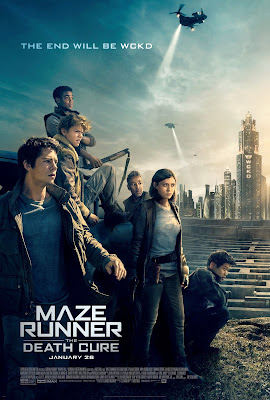 'MAZE RUNNER: THE DEATH CURE': Four Stars (Out of Five)

The third installment in the dystopian sci-fi trilogy, which is based on the popular YA book series by James Dashner. In this finale, Thomas must lead his friends through one final deadly maze, in order to break into the last city. It was directed by Wes Ball (like the previous two films), and it was written by T.S. Nowlin (who also wrote, or co-wrote, the previous two chapters). The movie stars Dylan O'Brien (in the lead once again), Kaya Scodelario, Thomas Brodie-Sangster, Dexter Darden, Rosa Salazar, Ki Hong Lee, Will Poulter, Aidan Gillen, Giancarlo Esposito, Barry Pepper, Patricia Clarkson and Walton Goggins. It's received mixed reviews from critics, and it's also a modest hit at the Box Office as well (although it hasn't done as well as the previous two installments). I enjoyed it.

Thomas (O'Brien), Newt (Brodie-Sangster) and Frypan (Darden) are the last of the 'Gladers' (and those who are immune to the virus). They're desperately trying to save their friend, Minho (Lee), who's also immune and being held captive by the WCKD (in order to test his blood for virus cures). The trio makes their way to the Last City, with the help of other rebel survivors Brenda (Salazar) and Jorge (Esposito). Once there they team-up with an army of infected rebels, as well as another friend that they thought was dead.

The movie is surprisingly intense, and very dark and bleak. The action scenes are really well done, compared to your average YA book adaption, and I think it's a quality made sci-fi dystopian genre flick. I think you have to be a fan of the series though, to keep up with all of the characters and their drama. I didn't remember what was going on with all of them, from the previous films (and I didn't read the books either). I was still pretty entertained by the movie though. It's a bit long, but it is action-packed and always exciting. I look forward to seeing what this director does next.
at 7:23 PM
Labels: 20th Century Fox, Reviews, The Maze Runner: The Death Cure