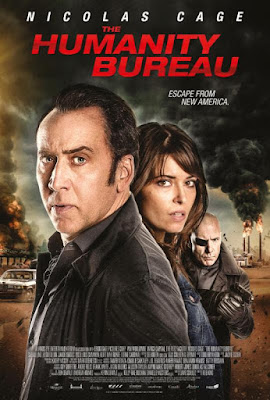 "The Humanity Bureau" will be released in standard theatrical theaters, Barco Escape format theaters and Premium Video On Demand (PVOD) on April 6th.

For more information on this film, you can visit the film's official website at: http://www.thehumanitybureau.com/.

The Sci-Fi Action Thriller, The Humanity Bureau, starring Nicolas Cage, is set to release in standard theatrical theaters, Barco Escape format theaters and Premium Video On Demand (PVOD) on April 6, 2018. The film’s debut will be complimented by the release of a standalone episodic Virtual Reality (VR) series titled “The Humanity Bureau VRevolution,” which will be available for download across all VR platforms on March 2, 2018.

“We shot the film in three different formats, including standard theatrical, 3-screen Barco Escape theatrical, and cinematic virtual reality to provide multiple avenues for audiences to engage with and experience the story’s universe," said Producer Kevin DeWalt. “We hope to give viewers more options for alternative content within today's new media.” The story is set in the near future with global warming wreaking havoc in parts of the American Midwest. In its attempt to take hold of the economic recession, a government agency called The Humanity Bureau exiles members of society deemed unproductive and banishes them to a colony known as New Eden.

Cage plays an ambitious and impartial caseworker who sets out to save the lives of Rachel Weller (Sarah Lind) and her child Lucas (Jakob Davies), while exposing the truth about the bureau's secrets. Hugh Dillon also stars as a villainous Humanity Bureau Officer.

The Humanity Bureau VRevolution is based on the feature film written by Dave Schultz and Travis Cloyd. Directed by Rob W. King and Josh Courtney, it is a scripted narrative VR experience produced by Cloyd, Courtney and Rob Bryanton. This experience takes the user through alternative storylines that co-exist with the feature film, but can be viewed as standalone episodes. The VR experience will be released one month ahead of the film’s theatrical debut.