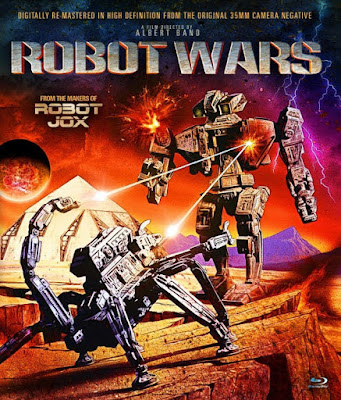 I always love it when Full Moon goes back into the vaults and release one of the Paramount era films on blu-ray. It gives me that nostalgic feel that I had when I first watched them on VHS and cable. Their latest release is Albert Band’s “Robot Wars”, one of the lesser films of that era.

The film takes place in the future where the United States is split into two. The mega robots used for war are now used for peace and tourism. When a war monger takes over one of the MRAS-2 and hostages, only a reckless robot pilot can save them. The only way that he can do it is find ageing MEGA-1 to combat the war monger and his evil plans. The film stars Don Michael Paul and Barbara Crampton.

It’s been a while since I’ve seen “Robot Wars”. In fact, the last time I saw this film was on a two pack of films that also included Crash and Burn (which is the better of the two films) released by Shout Factory back in 2011. “Robot Wars” doesn’t hold up to the test of time unlike some of Full Moon’s films like Puppet Master, Subspecies, and Trancers 2 to name a few have but this film still has that guilty pleasure feel to it.

What I liked about this film was the fact the direction was good. Albert Band (the late father of Charles Band) makes sure that he keeps the action moving. Whether it’s the way he makes sure the action keeps moving to how he manages the action scenes, everything is done in a way that makes this fun to watch. The other thing that Band does well is to make sure the acting to good enough to keep you from turning off. He makes sure that his cast is making their characters interesting enough to keep this from falling completely apart. It made the film watchable. Also, the film has very good stop motion effects from the late Dave Allen, as the effects felt like more of the star of the film then the actors.

The screenplay was something else. This felt like something that you would see a cheesy sci-fi films. One of things that I didn’t like about Jackson Barr’s screenplay was the fact that it some of the scenes were short. Don’t know if it was because of budget or the fact that he didn’t care. Scenes like the heroes popping out of nowhere or the scene where they found the robot, it felt like one minute they were in one place and the next either ambushing the villains or inside the main control room of the robot. It felt rushed. The other thing that I didn’t like was the film’s running time. With a running time of seventy-one minutes, there was no need for a film of this caliber to have that running time when it’s distributed by a major studio. This should’ve been at least around eighty to ninety minutes. It would cover some of the screenplay’s flaws.

There are some nice retro extras on this disc including a full length Full Moon Videozone, a vintage promo which highlights the career of Charles Band around the nineties. There is also a new featurette called “Wizard of Wars” about the late David Allen, who was the special effects coordinator for this and many of Full Moon’s Paramount films. It feature a eleven minute interview with Full Moon head Charles Band talking about the various works of David Allen that he’s worked on with him on his films over the years whether it’s as producer or director. You also get a brief glimpse of David Allen’s unfinished film “The Primevals”. This is a must if you were a fan of the early Full Moon film which features Allen’s works.

I would rank this as one of the bottom films in the Full Moon/Paramount era isn’t as par as some other of Full Moon’s film because of the screenplay. “Robot Wars” is a film that features good directing, very stop motion effects and a screenplay that doesn’t stand up to the test of time compared to most of Full Moon’s Paramount films.