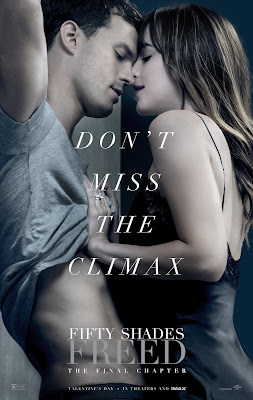 The third installment in the blockbuster erotic romantic thriller series, based on the three hit books (beginning with 'Fifty Shade of Grey') by E.L. James. In this chapter Ana and Christian are finally getting used to a more stable relationship together, although it's still really kinky and abusive, when a stalker from Ana's past continues to ruin their happiness. The film was directed by James Foley and written by Niall Leonard (the same duo also performed both duties on the last sequel), and Dakota Johnson and Jamie Dornan once again reprise their starring roles (for the third time). The movie also costars Eric Johnson, Max Martini, Brant Daugherty, Eloise Mumford, Rita Ora and Luke Grimes. It's received almost unanimously negative reviews from critics once again (like the others), but it is expected to be another hit at the Box Office though (like the others). I once again hated it.

Ana (Dakota Johnson) and Christian (Jamie Dornan) are married, and finally starting to live a happy life together. Christian can't relax though, as he's constantly worried about Ana's safety. Especially when the couple realizes that Ana's ex-boss, Jack Hyde (Eric Johnson), who also sexually assaulted her, is out of prison and stalking her. Christian does everything he can to try to keep Ana safe, including commanding her on where and when she has to be somewhere, but Ana wants her freedom, and doesn't listen. The couple's new happiness is of course soon jeopardized because of this.

I've hated this series from the beginning, because it makes a hero out of a #MeToo culprit (Christian Grey), and romanticizes stalking and sexual harassment. These are both things that the Christian character is guilty of doing to Ana, in the first two installments of the franchise. In this one his abuse towards her is at least seemingly consensual, but it still seems like the wrong message to send viewers (and readers of the novels). So I've always had a problem with the morality of supporting these films and books, and I don't understand why any intelligent moral person would. I've only continued to see each movie so that I can review them; in order to speak my feelings on this subject, and it's also just a lot more fun to review a bad film than a good one. This one is a really bad movie as well, and it's even worse than the first two installments. It seems like just a series of random pointless scenes strung together, by the weakest example of a plot that I've seen in a film in quite some time, just so they can give the viewer lots of erotic excessive sex scenes (as well as lots of pointless nudity). The movie really just feels like a well produced porno, but of course it's a heavy R-rated version of one (rather than X-rated).
at 7:21 PM
Labels: Dakota Johnson, Fifty Shades Freed, Jamie Dornan, Reviews, Universal Pictures