"The Villainess" Review by Anthony T 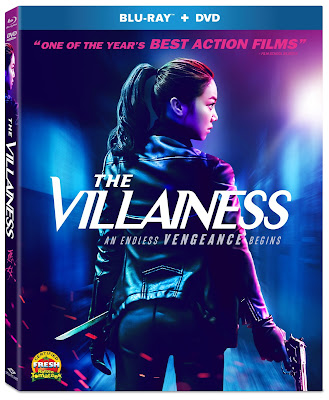 “The Villainess” is a film that I’ve been wanting to see ever since I first heard about. What drew me to wanting to watch this film was the fact that the film’s title has a kick ass title plus this is an action film and I haven’t reviewed one of those in a while.

The film is about a woman who recruited by a government agency after exacted revenge from a drug cartel. She is forced to become a sleeper agent for the government to have a normal life. Soon, her past starts to catch up with her as secrets destroyed everything for her. Now, she is forced to exact to take her revenge to a whole new level.

It’s been a while since I’ve seen an action film that had both great action and had some very good dramatic moments. “The Villainess” is a film that is action packed and emotion filled from start to finish.

Director/co-writer Byung-gil Jung does a very good job making this film feel different from other action films. From the way that he directs the intense action scenes to make sure the scenes have a certain feel to them, everything works as I was into the story and the main character. The other thing that Jung does very well is to make sure he get what he needs in the making the performance aspects work. The cast had great onscreen chemistry with each other which made the dialogue scenes entertaining. It added to all the insane action that this film has.

The film also had a great performance from the film’s lead Ok-bin Kim. She does a great job with the way that she approaches the film’s main character. Whether it’s the way she approaches the action scenes to how much emotion she brought to the dramatic scenes, it made interested in the character throughout.

The film written Byung-gil Jung and Byeong-gil Jung is one of the best of the year. What makes this screenplay work so well was the fact that they did a great job balancing both the action and dramatic aspects. It allowed the film to tell its story while providing some great action as it didn’t feel like an action only film where it was action all the time. The other thing that I liked about this was the fact that it does a great job developing the main character. I liked how the writers do this during the course of the film. It makes the main character interesting and makes some the dramatic scenes work well. This is what helps makes an action film like this very entertaining.