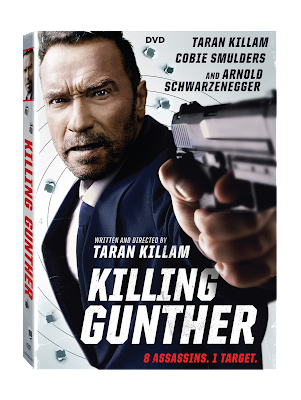 An action-comedy written and directed by debut feature filmmaker Taran Killam. Killam also costars in the movie, with Arnold Schwarzenegger (in the title role), Bobby Moynihan (Killam's SNL costar), Hannah Simone, and Cobie Smulders (Killam's wife). The film tells the tale of a group of assassins that are attempting to kill the world's greatest assassin, Gunther, but he keeps outwitting them. It's received mixed (average) reviews from critics, and it's now available for rent on video and VOD. I found it to be surprisingly entertaining, and much better than I had expected actually.

Blake (Killam) is a professional hitman who decides he needs to kill the world's greatest assassin, named Gunther (Schwarzenegger), in order to become more famous. So he recruits an entire team of eccentric hitmen, and hitwomen, in order to help him do it. He also hires a documentary film crew to record everything they do, in order to prove their accomplishment. Gunther is always able to outwit the team's every move though.

The film is hilarious, from beginning to end. Parts of it are really silly, but I found it all to be pretty funny. If you're expecting a lot of Arnold Schwarzenegger, he doesn't really come into the movie until the climax though, but once he comes on screen, he steals every scene he's in. It's also totally entertaining. So I had a blast watching the film, and I didn't even think it looked that good (from the trailer). I think if you're an SNL type humor fan (especially Killam and Moynihan), and a Schwarzenegger fan, you'll definitely enjoy this movie. It's a little like an SNL skit that's extended into a movie, and a really good one at that, guest starring Arnold Schwarzenegger!
at 8:12 PM
Labels: Arnold Schwarzenegger, Killing Gunther, Lionsgate, Reviews