"Dance Baby Dance" Dances It's Way to Theaters and VOD 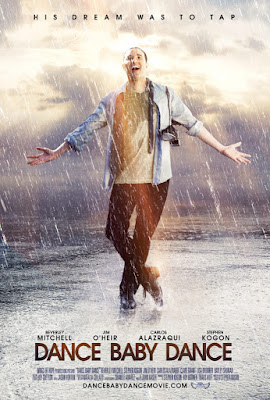 His Dream Was to Tap.

This January experience the joy and spectacle as writer-director Stephen Krogan dances towards his dream.

Beverley Mitchell (“Seventh Heaven”), Jim O’Heir (“Parks and Recreation”), Carlos Alazraqui (Despicable Me 3) and Stephen Kogon star in the first feel-good film of 2018, DANCE BABY DANCE, in theaters and available on Amazon from 1/19 via Indie Rights.

Have you ever had a dream? JIMMY PERCER did. His was to be a professional tap dancer. And in his early 20s, he was on his way … until a horrible knee injury stopped him in his tracks. He rehabbed like crazy to get back to where he had a chance again … only to re-injure the knee. The dream never died, but life happened. He met a pretty girl (TESS), they got married, he got a job and the years went by.

Now in his mid-30s, and still happily married, he sees one last chance to still go for his dream. A showcase for a touring dance show is coming to his town. To be chosen in this showcase means being a part of the touring show for a whole year. He’ll have to compete against younger and better dancers to be chosen. And to make it even harder, his surgically repaired knee never recovered 100%, making it difficult to do moves that once came so easily. But no one wants it more, and no one will work harder.

As that’s going on, Tess’ sister LANIE and her 9-year-old daughter KIT come live with them. Kit is upset about her mom and dad splitting up, and won’t talk to anyone. However, she loves to dance, and sneaks off one day to watch Jimmy practice. They end up doing a little tap dance routine together and as they bond, she starts coming out of her shell, and in turn she starts gaining self-esteem.

As the day of the showcase nears, the obstacles keep mounting for Jimmy. His knee starts feeling sore, a new amazing tap dancer enters the competition, and Tess and Jimmy’s financial situation worsens. Due to all this, Jimmy’s confidence starts to fade – until Kit returns the favor and helps get Jimmy back on track.

When the big day of the showcase arrives, it becomes all that much clearer how brilliant the competition is. Even those who believe in Jimmy the most, know the odds are great.

And now it’s his turn to dance. Will he be able to rise above all the competition, and his own shortcomings, to dance the performance of his life? If so, then his lifelong dream will be realized.

DANCE BABY DANCE premieres at the Arena Cinelounge, Hollywood on January 19  - followed by a week long run - as well as releases on digital at Amazon.