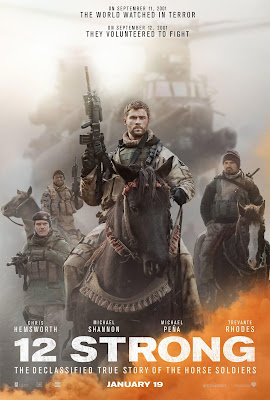 A war film about CIA Paramilitary and U.S. Special Forces who were sent to Afghanistan, immediately after the September 11th attacks, to combat Taliban soldiers there. It's based on the non-fiction book 'Horse Soldiers' by Doug Stanton, and it was scripted by Ted Tally and Peter Craig. Sophomore feature filmmaker Nicolai Fuglsig directed the movie, which stars Chris Hemsworth, Michael Shannon, Navid Negahban, Michael Pena, Trevante Rhodes, Geoff Stults, Thad Luckinbill, William Fichtner and Rob Riggle. It's received mixed reviews from critics, and it's expected to be a modest hit at the Box Office as well. I found it to be pretty dull and uninvolving.

The story begins with the September 11th terrorist attacks being witnessed on TV by Captain Mitch Nelson (Hemsworth), and his family. Mitch is eager to retaliate against those responsible, and he begs his superior officers for his Captain position back, in order to do so. Mitch, along with Chief Warrant Officer Cal Spencer (Shannon), Sergeant First Class Sam Diller (Pena), and other U.S. soldiers, are then sent to Afghanistan to attack the Taliban forces there. Once there, they partner with the leader of the alliance, General Abdul Rashid Dostum (Negahban), and quickly start to plot their revenge.

The movie looks like a fun war action flick, and I like the premise to it, but for me the film is just way too boring. I couldn't even get into the action scenes (which I'll admit happens a lot for me with recent action flicks), but the whole story, and character development, is pretty weak and uninvolving. The performances are pretty dull and uninspired too, and it's definitely a talented cast. With the exception of Navid Negahban (he's a scene stealer in it), most of the actors seem to be just there for their paychecks. I could not wait for the movie to be over, for most of it's 2 hour and 10 minute running time, but I'll admit that I'm sure some action junkies, and war film fans, will probably enjoy it. Technically speaking, the movie isn't half bad.
at 12:35 PM
Labels: 12 Strong, Chris Hemsworth, Michael Shannon, Reviews, Warner Brothers