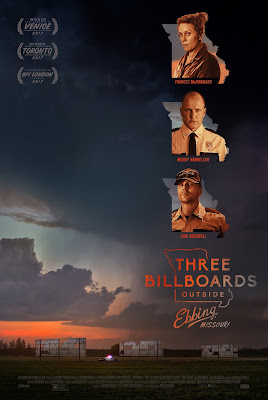 'THREE BILLBOARDS OUTSIDE EBBING, MISSOURI': Five Stars (Out of Five)

The critically acclaimed, multi-award winning, Oscar hopeful from Academy Award winning writer/director Martin McDonagh (who previously won an Oscar for writing 2008's 'IN BRUGES', which he also directed). The film is a dark comedy-drama about a grieving divorced mother, who puts up three billboards (outside Ebbing, Missouri) shaming the police for not making any progress in her daughter's brutal rape and murder case. It stars Frances McDormand, Sam Rockwell (who also starred in McDonagh's 2012 hit 'SEVEN PSYCHPATHS'), Woody Harrelson, Lucas Hedges, Caleb Landry Jones, Peter Dinklage, Abbie Cornish, John Hawkes and Samara Weaving. The film has received nearly unanimous rave reviews from critics, and it's also won multiple prestigious awards as well (and been nominated for a shitload of others). It's expected to be nominated for multiple major Academy Awards too. I loved it.

Mildred Hayes (McDormand) is a single divorced mother, who's still grieving over the horrific rape and murder of her teenage daughter, seven months earlier. She is especially upset with the local police department for not making any progress in the case. So she puts up three billboards shaming them, especially Sheriff Bill Willoughby (Harrelson), who's dying from pancreatic cancer. Willoughby, and officer Jason Dixon (Rockwell), are extremely annoyed by her actions, as well as most of the rest of the town, and Mildred and her depressed teenage son, Robbie (Hedges), are harassed for it. Mildred still presses on though.

The movie is especially impressive in how it presents such a diverse range of fully developed characters, that are all extremely flawed and yet still very relatable (as both likable and seemingly very real people). It's an excellent tale of forgiveness, in my opinion, and learning how to accept and tolerate those you don't agree with. The climax and ending of the movie are also both priceless. It's so emotionally charged and totally unpredictable, that the film just really leaves you thinking about it, long after it's over. McDormand and Rockwell are also both outstanding in their roles, and McDonagh proves himself as one of Hollywood's top directors to watch for. The film is definitely a must see!
at 6:02 PM
Labels: Fox Searchlight, Frances McDormand, Missouri, Peter Dinklage, Reviews, Sam Rockwell, Three Billboards Outside Ebbing, Woody Harrelson