"Long Night in a Dead City" Review by Anthony T 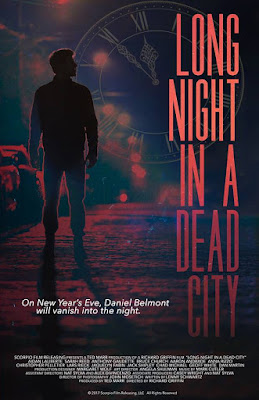 Back in July, yours truly reviewed this film on our sister site Anthony T's Horror Chamber as I had the chance to catch the world premiere of Richard Griffin’s latest film “Long Night in a Dead City”. which is now available on VOD.

The film is about a person (Aidan Laliberte) who wakes up in the middle of nowhere on New Year’s Eve. With no memory of what happened to him, he sets out to look for his brother whom he was hanging out with. Along the way, he meets a mysterious woman (Sarah Reed) who leads him down the spiraling path to drugs, sex and murder. Will he be able to find his way out the nightmare before becomes missing forever.

“Long Night in a Dead City” is maybe Richard Griffin’s most dark and surreal film to date. Yes, this is coming from a person that has seen his other surreal and entertaining films “Beyond the Dunwich Horror”, “Exhumed” and “The Disco Exorcist”.

What makes this film very good was Richard Griffin’s direction. He does a very good job pulling off all the surreal aspects that this film has. Whether it’s the way that he directs the action to how his cinematography Nate Sliva captures the images, everything had a David Lynch feel to them. It kept my interested as this is one of those films where the imagery is so surreal in a good way that it makes you interested in the story. The other thing that I liked was the way that Griffin directs his cast. There isn’t much dialogue in the film but he makes sure that the performers make the scenes very haunting. He gets very good performances from his leads Adrian and Sarah Reed. They both made their characters stand out which is needed for the film to succeed. It helped made this one a very surreal one from start to finish.

The screenplay from Lenny Schwartz was good even thought its very surreal. One of the things that I liked about it was the way that he does a good job focusing on his main character. Whether it going to into the state of mind of the main character to minimizing the main character’s dialogue, it makes the character and his journey a surreal and entertaining one. This is what made this character interesting which was definitely needed for this The other thing that makes the screenplay good was the fact that the action keeps everything moving at good pace. It allowed me to digest the basics of everything that was going in the story considering its one of those films where you have to pay attention to everything and not wonder off. If your film is going to be surreal and/or go the David Lynch route make sure it hooks the viewer in so that it allows the viewer to draw their conclusions about what happened and makes them want to rewatch the fil to pick up things that they’ve missed the first time around. This film does that as this story was entertaining and grabs your attention.

I highly suggest you find a way to check this film out as will be hitting the film festival circuit soon. With great direction, very good lead performances and a surreal screenplay, “Long Night in a Dead City” is one film that will take you on surreal trip that you won’t forget.

To rent or purchase this film on VOD, you can goto: https://vimeo.com/ondemand/longnightinadeadcity