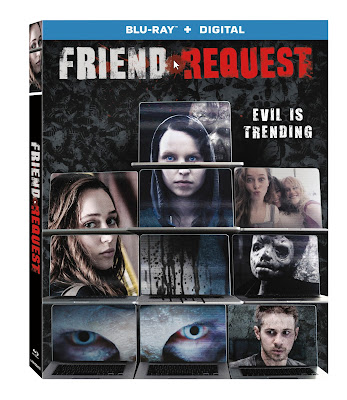 The consequences are deadly when black magic mixes with social media in Friend Request, arriving on Digital December 19 and on Blu-ray™ (plus Digital), DVD and On Demand January 9 from Lionsgate. Alycia Debnam-Carey (“Fear the Walking Dead,” Into the Storm) leads the terrifying feature, which also stars William Moseley (The Chronicles of Narnia franchise, “The Royals”), Connor Paolo (“Revenge,” “Gossip Girl”), Brit Morgan (“Supergirl,” “Graceland”) and Liesl Ahlers (The Challenger Disaster).

Laura (Alycia Debnam-Carey) is a popular college student who lives her college life to the fullest and gladly shares it with her 800 Facebook friends. But when she accepts a friend request from her mysterious classmate Marina (Liesl Ahlers), she unwittingly sets a terrible curse in motion. The dead girl’s impenetrable profile begins to drive Laura into isolation. It takes control of Laura’s virtual world and her real life as well. One after another, her closest friends die horrendous deaths, leaving Laura with only a few days to solve the enigma of this haunting curse to save the few friends she has left, as well as her own life.