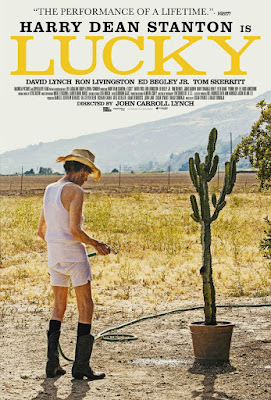 A drama starring Harry Dean Stanton in one of his final on-screen roles, before his death on September 15th, 2017. Stanton plays a 90-year-old atheist dealing with old age. It was directed by veteran actor turned first time director John Carroll Lynch, and it was written by Logan Sparks and Drago Sumonja (two veteran actors turned first time screenwriters). The movie also features supporting turns from David Lynch, Ron Livingston, Beth Grant, Ed Begley Jr., Barry Shabaka Henley and Tom Skerritt (reuniting him with his 'ALIEN' costar). The film has received almost unanimous rave reviews from critics, with Stanton's performance getting especially high praise. I think it's a well made character study, with a good performance from Stanton, but it's also just a little overrated.

Stanton plays Lucky, a 90-year-old stuck in his ways, including smoking, that spends his time walking around his small town and hanging out with other elderly locals at a dive bar. He faints one day, and has to see a doctor (Begley Jr.) about it. Then he starts worrying about his upcoming death. The whole time he gets into arguments with his friends, and outsiders; like a lawyer (Livingston) setting up a will for his friend's (Lynch) turtle. He also continues to try to light up cigarettes in non smoking establishments.

The movie is slow-paced, but it does have a lot of interesting dialogue. Not a lot happens in it, so it will seem pretty uneventful (and dull) to some viewers, but those that appreciate a good character study should enjoy it. It's also pretty insightful; about dealing with old age and your quickly approaching death. Stanton is really good in the film, and it's great to see him in a lead role finally. It's also sad that he's no longer with us, but it's touching that he got this one last good role to play (about death and old age oddly enough). It's not a great film, but it is an important one I think.
at 6:49 PM
Labels: Lucky, Magnolia Pictures, Reviews