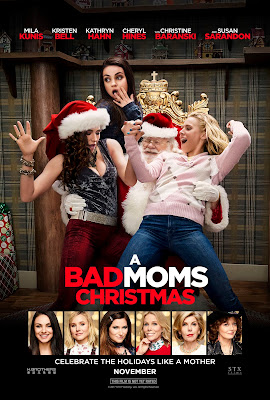 'A BAD MOMS CHRISTMAS': Three and a Half Stars (Out of Five)

The sequel to the 2016 comedy hit 'BAD MOMS' is a Christmas family comedy flick. It reunites Mila Kunis, Kristen Bell and Kathryn Hahn, in their overworked mother roles. This time they have to deal with their own overwhelming mothers, who are visiting for the holidays, while also trying to put on the perfect family Christmas. It costars Susan Sarandon, Christine Baranski and Cheryl Hines, as the three older moms, while Jay Hernandez also reprises his role from the first movie. It was once again written and directed by Jon Lucas and Scott Moore, and it's gotten mostly negative reviews from critics (unlike the first film). It is another hit at the Box Office though. I enjoyed it slightly more than the original.

Amy (Kunis), Kiki (Bell) and Carla (Hahn) are still overworked, and stressed out, especially because it's nearing Christmas time. They become even more over-burdened when all of their mothers show up for the holidays; Ruth (Baranski), Sandy (Hines) and Isis (Sarandon). Each of their moms is overwhelming, in different ways, which causes excessive chaos once again for the three young mothers. More bonding, of course, also occurs as a result of their new problems.

The film is a pretty routine Christmas comedy flick. The humor is definitely hit and miss (for me at least) as well, but it is more consistently funny than the original (in my opinion). I think largely due to the addition of the three older mother characters, and all of the three veteran actresses give good performances in their roles too (Baranski is especially domineering in her domineering mother role). I also think Bell, Kunis and Hahn are more settled into their roles this time around as well. So overall I'd say this sequel definitely surpasses the original, at least by a little.
at 9:11 AM
Labels: A Bad Moms Christmas, Kathryn Hahn, Kristen Bell, Mila Kunis, Reviews, STX Entertainment