Troma Give Everyone "The Middle Finger" on Blu-Ray 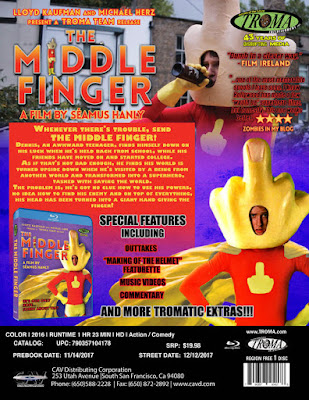 Whenever there's trouble, send The Middle Finger! Dennis, an awkward teenager, finds himself down on his luck when he's held back from school, while his friends have moved on and started college. As if that's not bad enough, he finds his world is turned upside down when he's visited by a being from another world and transformed into a superhero, tasked with saving the world. The problem is, he's got no clue how to use his powers, no idea how to find his enemy and on top of everything, his head has been turned into a giant hand giving the finger!
at 7:22 PM
Labels: DVD/Blu-Ray News, The Middle Finger, Troma Entertainment