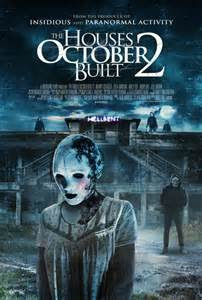 “The Houses October Built 2” is the sequel to the original film that was released in 2014. The original did well enough to warrant another but did we really need another film.

The film follows the same group from the films who survived the first film are trying to face their fears by going back on the road and touring some favorite haunting sights Soon, they begin to realize that that the Blue Skeleton is back and stalking them again to finish the job. Will they be able to face their fear and outsmart the blue skeleton or will he finish the job.

Going into “The Houses October Built 2”, I wasn’t expecting much considering that this looked like it was going to be the same thing as the first film was. I was feeling like that this was the same thing as the first film and it looked like I wasn’t going to like this even thought I liked the way it was filmed. Then something happened which I won’t go into to it since it’s a major spoiler but it was able to change the way I looked at this and “The Houses October Built “. The ending was cleaver enough which makes all the lags work so well that it makes this film have some commentary. It made me finally get with what the filmmakers were going for in this and in the original.

One of the reasons that I liked this better than the original was the fact that Bobby Roe’s directing was better here. The film still has the same format like the first film had but it was well better executed. Whether it was the way that he incorporates the found footage aspects to how the images especially the ones that were shot on a drone seem to stand out more, it made the film look better and it felt more engaging which the last didn’t do at times. The performances here were good. I liked he gets this cast to make each of these characters interact with the realistic parts that they encounter during their filming of this film. It gave the film its realistic tone which is needed. The other thing that I liked in the acting was the fact the cast made the scripted scenes work very well through their performances. It helped to film’s dreadful tone especially in the third as it added to the level of the film’s shocking ending.

The screenplay was written by Roe and Jeff Larson was good. One of the things that I liked about it was the fact that they make sure that it focuses of the characters and the various things that they do on this trip. Some of the scenes felt like they were based in reality with the various places and people they encounter. It had more of a realistic feel than the first film. The other thing that I liked about this was the ending. I know people are going to hate this ending like they hated the ending of “April Fools Days” but I’m one of those people that likes it because it’s unexpected. When something is unexpected and done in a clever way, I’m usually going to like it because its different. The writers do a good job making sure that it was something that changes your perception of this and the first film with ending. It makes it worth wanting to see both films again just to see how it’s pulled off. This story was well excuted and virtually kills any chance of future films which the best thing since it had definite end.

This is sure to be one of those films that is debated in the horror community. With its better directing and a shocking ending, “The House October Built 2” is better than the first one.