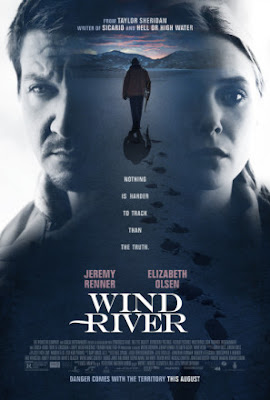 'WIND RIVER': Four and a Half Stars (Out of Five)

The new crime-thriller from acclaimed screenwriter Taylor Sheridan; who also wrote 2015's 'SICARIO' and 2016's 'HELL OR HIGH WATER'. Sheridan also directed the film, in his sophomore directorial effort (following the 2011 horror flick 'VILE'). The movie stars Jeremy Renner and Elizabeth Olson (Hawkeye and Scarlet Witch together again) as a US Fish and Wildlife Service agent, and an FBI rookie, trying to solve a murder on the Wind River Indian Reservation in Wyoming. The movie has received nearly unanimous positive reviews from critics (like Sheridan's other two screenwriting efforts), and it's also been a success in it's limited theatrical run at the Box Office so far (also like Sheridan's other recent movies). I found it to be pretty dang good.

Cory Lambert (Renner) is a US Fish and Wildlife Service agent who's currently investigating the killing of livestock at the Wind River Indian Reservation in Wyoming. While trying to find the den of the suspected lions involved, Lambert comes across the body of an 18-year-old female resident. The FBI sends a rookie agent, named Jane Banner (Olson), to lead the Tribal Police there in their investigation. Due to Lambert's skills at tracking in the area, Banner asks him to assist them as well. Their efforts soon lead them to some very dark, and brutal places. Places that Lambert is very familiar with, having also lost a daughter there (the same age) in a similar way.

The movie starts out a little slow, in my opinion, and then it keeps picking up pace, until a very intense and dramatic conclusion. The climax is definitely my favorite part of the film, but it's also very dark and violent (and you have to have some patience to get to it). The character development, and performances, are both excellent though (Renner is always good outside of Marvel movies, I think). I got pretty teary eyed multiple times throughout the film as well. It's another near masterpiece from Sheridan, in my opinion, and he proves himself as a very talented director here too.
at 8:06 PM
Labels: Elizabeth Olson, Jeremy Renner, Reviews, The Weinstein Company, Wind River