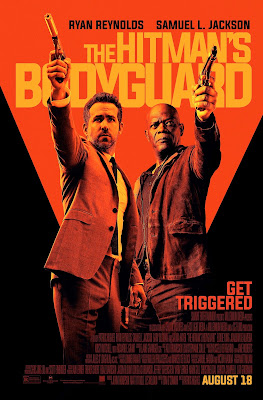 'THE HITMAN'S BODYGUARD': Four Stars (Out of Five)

The new action-comedy starring Ryan Reynolds and Samuel L. Jackson, as a hitman (Jackson), who's supposed to testify at the International Court of Justice, and his bodyguard (Reynolds). The film costars Elodie Yung, Salma Hayek, Gary Oldman, Joaquim de Almeida and Richard E. Grant. It was directed by Patrick Hughes (who also helmed 'THE EXPENDABLES 3') and it was written by Tom O'Connor (the script was featured on the 2011 Black List). It's received mixed (to negative) reviews from critics, but it is a hit at the Box Office so far. I found it to be a pretty amusing action buddy flick.

A sadistic Eastern European dictator, Vladislav Dukhovich (Oldman), is on trial for atrocious crimes against his people, but there's not enough legal evidence to convict him. Notorious hitman Darius Kincaid (Jackson) makes a deal to testify against Dukhovich, in order to free his incarcerated wife (Hayek). Expert bodyguard Michael Bryce (Reynolds), who's fallen on hard times recently, is tasked with transporting Kincaid from the United Kingdom to the International Court of Justice. The only problem is that the two are mortal enemies, and they also have an army of bloodthirsty assassins (working for Dukhovich) trying to kill them the whole time. They of course bond on their adventurous road trip.

The movie is actually a surprisingly cool action flick; which shouldn't be that surprising (I guess), considering it was directed by the guy who did 'THE EXPENDABLES 3' (and I'm a fan of that film as well). The movie also has great chemistry between it's two leading men, and it's quite funny at times as well; Hayek and Yung are also both great in their roles too (and sexy). The movie does get a little long at times, but for the most part it's a lot of fun. Especially if you like good actions flicks, and Reynolds and Jackson!
at 8:13 PM
Labels: Gary Oldman, Lionsgate, Reviews, Ryan Reynolds, Samuel L Jackson, The Hitman's Body